Michelob Ultra Is A Family Of Four

Currently, there are four Michelob Ultra recipes in the brand family: The original Michelob Ultra Superior Light Beer launched in 2002. In 2018, innovations started ramping up.

In February 2018, A-B launched Michelob Ultra Pure Gold, an organic version of the light lager billed as the first USDA-certified organic beer from a national brewer.

A little over a year later, the brand launched Michelob Ultra Infusions, a new version of the beer flavored with exotic fruit. The first label, Lime & Prickly Pear Cactus, launched in March 2019 and Pomegranate & Agave is expected to be next.

Michelob Ultra Beer is a pale larger that is owned and distributed by Anheuser-Busch InBev.

Anheuser-Busch InBev is a major multinational drink and brewing holdings company who also own and produce well know brands such as Budweiser, Bud Light, Corona, and Leffe.

Lets find out if this beer is gluten-free . . .

Many consumer publications, blogs, and websites have felt the need to define Michelob Ultra as something other than what it is: a light lager made with malted barley, rice, hops, water, and yeast.

In a Fox News article titled, What a Mans Choice in Beer Reveals About His Personality, Michelob Ultra is defined as The Guy Drinking Low-Cal Beer: Besides his ultra-strict diet theres nothing really ultra about this guy. He might be young and beautiful, but hes a bit conceited. He has a strong, confident opinion, but can also be confrontational and controlling. Perhaps hes into you, but hes probably more into himself.

A similar article in AdAge, What Your Taste in Beer Says About You, based on an actual study, says: Michelob Ultra drinkers rate high in superiority that is, they think highly of themselves and can be a little bit conceited. They care what other people think about them and want to appear perfect. They also tend to be take-charge types with strong opinions, and can even be confrontational. Michelob Ultra drinkers are 43 percent more likely than the average person to consider sustainability a priority, and 34 percent more likely to buy life insurance.

Michelob ultra pure gold has released its super bowl spot. With only 2.5 carbs and 85 calories, pure gold is triple filtered and brewed free of artificial colors and flavors. The superior light beer for those who want to work out and still go out. Michelob ultra is the superior light beer brewed for those who understand that it’s only worth it if you enjoy it. We realized that half of the growth in the seltzer segment is actually coming. Because an active life and a social life were made for each other, michelob ultra is made with fewer calories. Surprisingly, the michelob ultra calories are. I never skip arm day. Enjoying michelob ultra pure gold without any guilt since its only 85 calories and 2.5 carbs. All the brands of beer that michelob produce are made from gluten loaded grain ingredients such as wheat, hops and barley. The level of gluten is very low. In fact, our light lager is 72% fewer calories than leading white wines, and. Ab inbev, which owns the brand, believes for michelob ultra, the launch signifies a more diversified lineup for the brand and the potential to attract even more beer drinkers across a bigger.

Michelob Ultra Is The Gatorade Of Beer 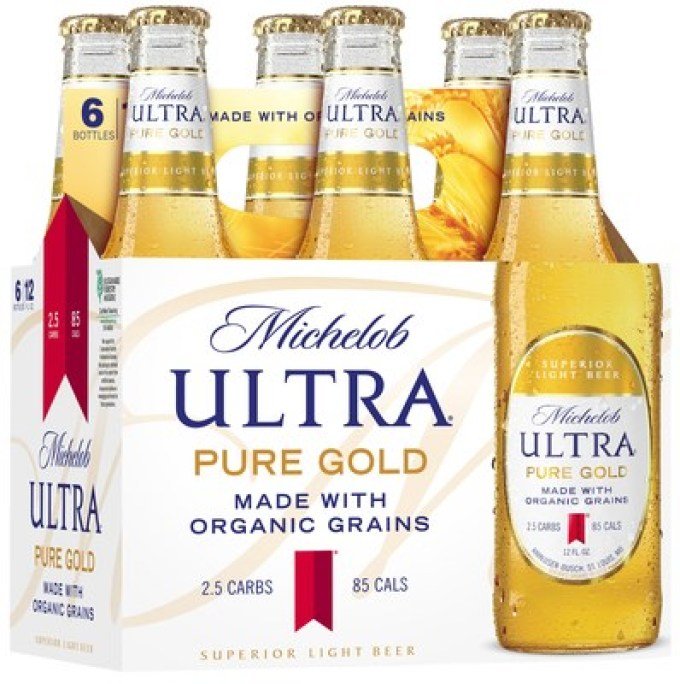 In a 2019 interview with Bloomberg TV, AB InBev chief executive officer Carlos Brito said of Michelob Ultra: If you work out and go out, no need to compromise, because its a great-tasting beer with less carbs, less calories, less alcohol for you to be able to have that active lifestyle. For more than a decade, Michelob Ultra has been marketed as a sports drink, with ads featuring the likes of Lance Armstrong in 2010, and three-time Olympic gold medalist beach volleyball star Kerri Walsh Jennings in 2019.

Speaking to Fortune, Spiros Malandrakis, head of alcoholic drinks at research firm Euromonitor International, said Michelob Ultra capitalized on the rising trend of health and wellness more than any other premium lager. Running, marathons, and a healthy lifestyle that wasnt typically focused on beer, Malandrakis said.

So to make this 2 minutes salad, all you need is some:

Just mix everything together as per recipe instructions below and you would be soon biting into the MOST Refreshing & delicious salad that you could ever make in 2 minutes.

If you like all sweet salad then you can skip the spice mix on top but I have to suggest.

Give it a try once as it tastes Ahhhhmaziiiiiing!

I also decided to serve them in individual cups but hey, if you want, you can just serve it in a large salad bowl or plate.

Another fun idea is to chop the cantaloupe and freeze it. Then mix all the fresh ingredients and serve.

I usually do this for summer picnics where we need to take food and serve little later.

I hope you get to try this salad soon with the Pure Gold beer and enjoy with your loved ones.

Here are some more + points on the beer:

Its The Calories And Carbs That Count

Michelob Ultra Is An Anomaly

According to market research firm IRI, dollar sales of Mich Ultra siblings Budweiser and Bud Light both declined during the first four months of 2019 . Michelob Ultra dollar sales increased 15.5 percent in the same period. By July 2019, the brand in on $1 billion in sales, Brewbound reports.

What Is Michelob Ultra Gold

It clocks in at just 85 calories and 2.5 grams of carbohydrates per bottle 10 fewer calories than the original Michelob Ultra. “Gold has what we like to call a fuller ‘mouth-feel’ with a longer finish, Azania Andrews, Vice President of Michelob Ultra, told Men’s Health. It also has a little bit of a heavier body.

Subsequently, question is, what are the ingredients in Michelob Ultra pure gold? While even big-name brands of beer are often low on the ingredients — barley, hops, water, yeast are all that’s needed — Michelob Ultra Pure Gold is using certified organic grains that have Sustainable Forestry Initiative approval to attract the healthy shopper seeking third-party certification.

Subsequently, one may also ask, what is the alcohol content of Michelob Ultra Gold?

Missouri- Light Lager- 4.2% ABV. A great tasting golden lager, with lower calories than ULTRA, signature low carbs, and a clean, balanced finish. Pure Gold is brewed with organic rice and barley malt, elevating the quality of the beer while delivering a superior taste.

Experience Pure Gold beer in its organic form. Michelob ULTRA Pure Gold is a USDA certified organic light lager with a pure, refreshing taste. With only 2.5 carbs and 85 calories, Pure Gold is triple-filtered and brewed free of artificial colors and flavors. Inspired by nature, enjoyed in nature.

Michelob Ultra Ads Are Fun And Made Fun Of

Michelob Ultra ran two Super Bowl ads for the first time ever in 2018. Both starred Chris Pratt, the first a meta, tongue-in-cheek ad following Pratt as he trains for his big role as the Mich Ultra spokesperson and a second, real ad featuring Pratt, along with golfer Brooks Koepka and surfer Kelly Slater.

Unfortunately we do not deliver kegs at this time. Please remove this from your cart or switch to Pickup at store.

Or select other delivery address

Sorry the store is permanently closed. Check out our other nearby locations by clicking the button below. 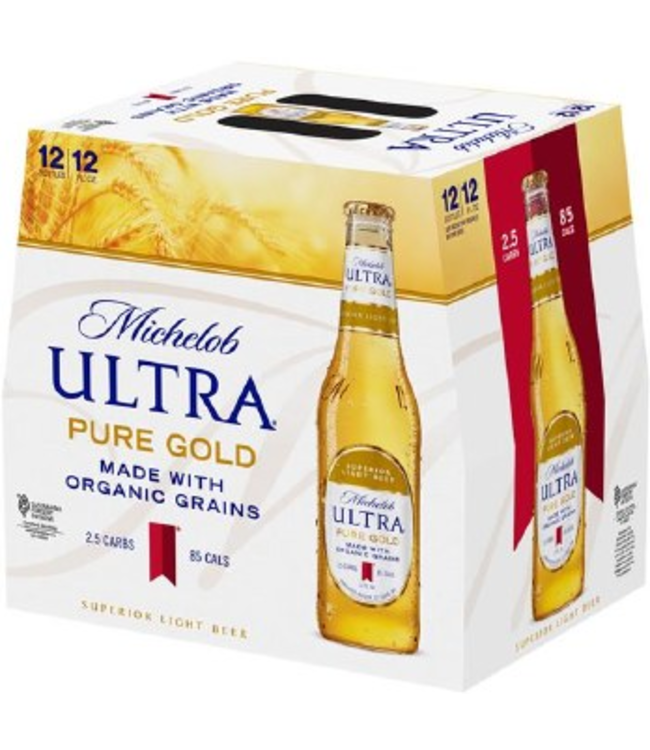 The Answer is: NO

Michelob Ultra like most beers is not gluten-free. All the brands of beer that Michelob produce are made from gluten loaded grain ingredients such as wheat, hops and barley. All Michelob beer should, therefore, be avoided if you are gluten intolerant or suffer from any form of Celiac Disease.

If you’ve been looking for the best low carb beer list, this post has got you covered. These 30 choices all have 5g of carbs or less, with a wide variety of options – from ales, to pilsners, to lagers, to IPA’s and more. And I also included an additional section of low carb beers that are gluten free, and others that are low calorie as well. So, no matter what your dietary restrictions are, there’s a beer here for you!

Michelob Ultra has finally launched their answer to the alcoholic seltzers market with an organic seltzer. The new drink is just 80 calories and is USDA organic certified. These seltzers offer some unique flavors and are yet another option on the market now, along with White Claw, Truly, Bud Light Seltzer, Vizzy, and countless others.

With the recent launch of Michelob Ultra Organic Seltzer, many people are wondering . . .

Is Corona A Gluten Free Beer

According to tests done by the Argentine Coeliac Association and the Swedish National Food Agency, several brands of beer including Carlsberg, Corona and Pilsner Urquell contain less than 20 ppm, allowing them to be described as gluten free. There are traces of gluten in all our beers.

Here are a few answers to some of the most frequently asked questions about gluten free beer. Hopefully, this helps!

What is gluten free beer made from?

Generally, gluten free beer is made from millet, rice, sorghum, buckwheat, and corn, all of which are ingredients that dont contain gluten. This as a result, doesnt trigger an autoimmune response in people with Celiac disease.

Some breweries will still brew with barley or rye but reduce the levels of gluten to below 20 ppm.

In the United States , a beer is considered gluten free if the gluten level is under 20 ppm

To place a gluten free label on your beer, it must be under 20 ppm, the FDA approval rating.

However, some people still tend to feel sick after drinking beer that have been distilled. So be sure to drink at your own risk.

What gluten free beer can I find at most restaurants ?

Generally speaking, most gluten free beers are considered craft beers, thus placing a premium of around $1.50-$2.00 on their prices.

Glutenberg tends to be a favorite

Are there any healthy gluten free beers?

Although from the outside this drink may seem like a hard cider, its actually a normal ale with apple flavoring. So be sure to avoid this at all costs.

How To Build Glutes At Home