MYTH: Celiac disease is the same thing as a wheat allergy.

FACT: Celiac disease is not the same as a wheat allergy.

Although celiac disease may appear to be similar to a wheat allergy because of the need to avoid certain foods, these two conditions are entirely different, with different health effects and treatments.

Wheat allergy is one of the most common food allergies in Canada. A food allergy is your bodys immune system overreacting to a specific protein in a food, such as wheat, milk, or peanut. Consuming food you are allergic to can trigger a reaction involving different symptoms, from itching, redness, and hives, to wheezing, inability to breathe, and loss of consciousness. A severe allergic reaction can even be fatal. People allergic to wheat are allergic to a part of wheat, which is not always the gluten part.

There is no validated test to diagnose GS. Some online labs offer blood, saliva, or stool tests for gluten sensitivity, but they are invalidated and not recommended.

It is impossible to develop a test when the mechanism of gluten sensitivity has not been determined. Diagnosis is made by ruling out CD and wheat allergy while the patient is on a gluten-containing diet. Once both are ruled out, a gluten elimination diet is prescribed. If symptoms improve, the patient is deemed to have gluten sensitivity. Using a response to initiation of a gluten-free diet as a prognostic indicator will give inaccurate results, as both celiac and GS can have similar responses to a gluten-free diet.

How Do You Know What You Have

If you experience negative symptoms after eating gluten-containing foods, it is a pretty safe bet that you have some kind of disease, allergy, or sensitivity to gluten. Unfortunately, identifying the exact condition you have may not be quite so simple. The first step in diagnosing your problem is to have your doctor run a blood test which may be followed by other diagnostic tests. While running these tests, you need to continue consuming gluten-containing foods it is only after you have a diagnosis that you should switch to a gluten free diet.

A blood test cannot confirm a diagnosis of celiac disease, but it can reveal the presence of immunoglobulin E antibodies which would suggest some kind of autoimmune or allergic reaction to gluten. If your blood test comes back positive for IgE antibodies, your doctor may recommend an endoscopy to check the small intestine for damage damage to the lining of the small intestine would confirm a diagnosis of celiac disease while a lack of damage would suggest wheat allergy, non-celiac gluten sensitivity, or gluten intolerance. To confirm a wheat allergy, your doctor may want to perform a RAST or skin prick test.

Prevalence Of Other Diseases 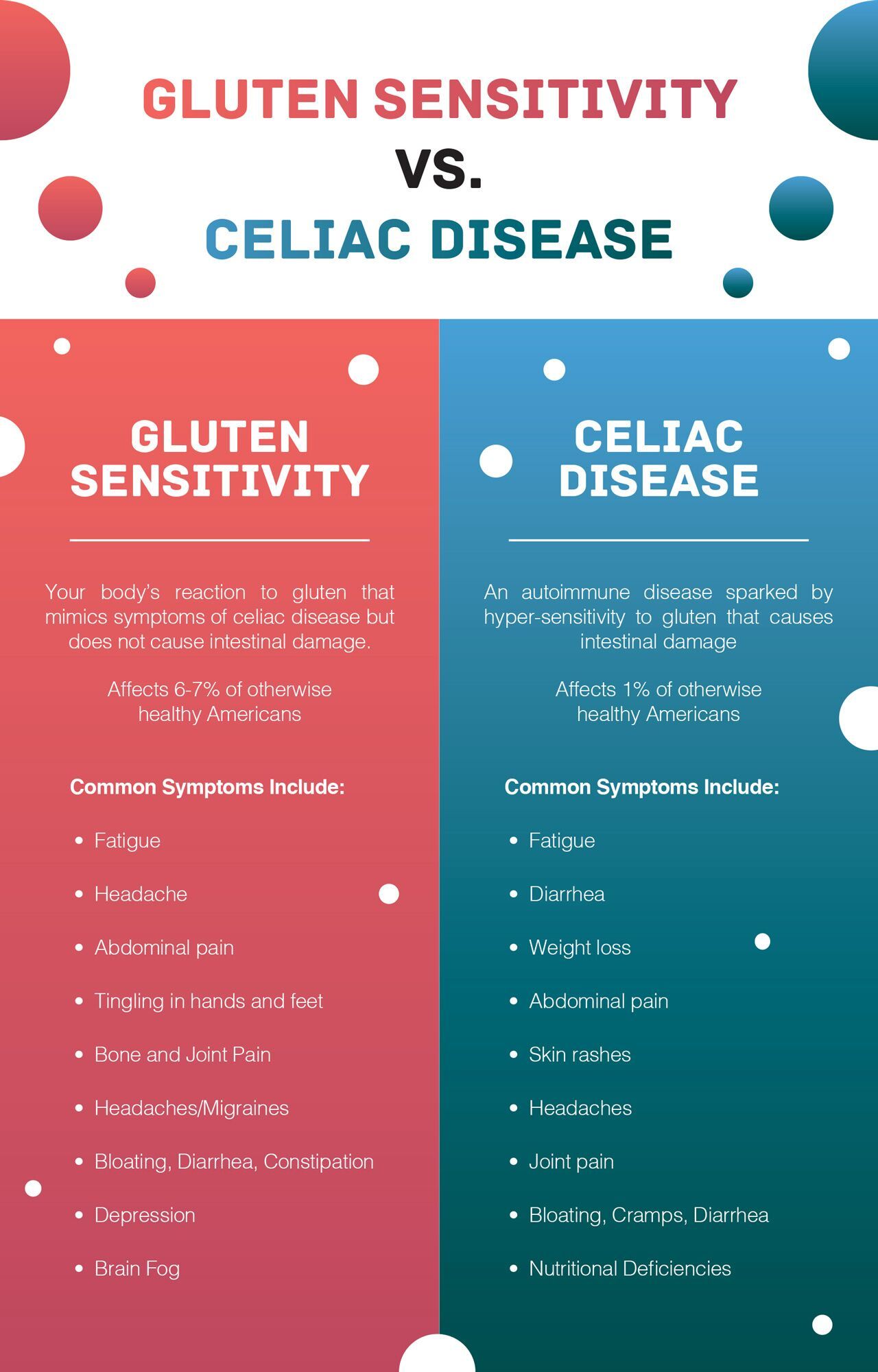 However, its important to note that many researchers say gluten sensitivity is a precursor to autoimmune disease, and Dr. OBryan makes a clear argument for this in his groundbreaking book. This means both disorders, if left unmanaged, put you at higher risk for accumulating additional autoimmune diseases.

Celiac disease is an autoimmune disorder, whereas gluten intolerance is a sensitivity, says Northwestern Memorial Hospital Clinical Dietitian Bethany Doerfler, MS, RD, LDN. NCGS does not typically have a full negative impact on overall health like celiac disease can.

Removing gluten from your diet if you dont have celiac or a gluten intolerance will give you no health advances, Doerfler adds.

What Happens When Someone With Gluten Intolerance Or Sensitivity Eats Gluten

While someone with either an intolerance or a sensitivity to gluten will not experience an immune response to the same degree someone with celiac disease would, they will experience some GI issues due to the mal-absorption of the protein.

“We think of gluten intolerance as a fairly tolerable illness, though, if we are unable to fully metabolize and digest the micronutrients, this becomes an issue of vitamin and mineral deficiencies as well as fat-soluble vitamin deficiencies as a consequence of a diuretic effect on the digestive system,” says Mancella.

In other words, gluten may inhibit the absorption of other vitamins and minerals in those with a sensitivity or intolerance.

In short, someone with celiac disease will oftentimes experience much more adverse reactions than someone with gluten intolerance or sensitivity. However, neither group should be consuming gluten. When in doubt, get testedâyou can never be too cautious when it comes to your health.

You May Like: Are Ezekiel English Muffins Gluten Free

Someone Must Be Eating Gluten For Tests To Be Accurate

Basic screening for celiac disease includes a serum TTG IgA and total serum IgA. Total serum IgA needs to be done to rule out IgA deficiency which occurs in about 10% of celiac patients. If IgA deficiency is present, the TTG IgG must be used but is less accurate. Further testing may be needed in those situations.

Some labs include a DGP-IGA and EMA in their celiac screen/panel or do these tests as a reflex. The confirmatory test is an endoscopic biopsy. The biopsy is indicated if tests are positive and are required for diagnosis.

Of note, many celiac centers and practitioners follow a more extensive evaluation process involving screening antibodies, genetic testing, clinical response to a gluten-free diet, and endoscopy. These protocols and other testing algorithms are beyond the scope of this article.

What is gluten? Gluten Intolerance/Gluten Sensitivity vs Celiac Disease vs Wheat Allergy

To help pinpoint what might be ailing you, it helps to understand the basics of three common gluten and wheat-related health conditions, as well as the differences between them.

Celiac disease is a chronic immune-mediated disorder. If you have CD, ingesting gluten damages the lining of the small intestine, making it difficult to absorb necessary nutrients. The condition is genetic, and experts believe it affects around one in every 150 people, although it may be underdiagnosed, since many people with CD may not even be aware that they have it.

Some people with a mild form of the disease may not experience any symptoms. Most however, will develop common signs like diarrhea, constipation, gas, bloating, abdominal pain, fatigue and sometimes nausea or vomiting. Some people with celiac disease may not have digestive issues but develop other symptoms, such as bone or joint pain, depression or anxiety, headaches, mouth problems, like canker sores or dry mouth, a smooth, shiny tongue and tingling or numbness in their hands and feet. Reactions typically arent immediate and symptoms may appear several hours after eating gluten. Left untreated, CD can lead to malnutrition, dermatitis herpetiformis , infertility, anemia, osteoporosis and a higher risk of some cancers, among other health problems.

Wheat allergy is like other food allergies, in which your bodys immune system overreacts to a substance most people find harmless in this case, wheat.

Three Factors Must Be Present To Have Active Celiac Disease

Patients must be consuming gluten for CD to be active.

Not all triggers are known, but identified triggers include early/repeated infections, pregnancy, and GI infections, antibiotic use at an early age.

What A Doctor Can Do

If youre experiencing unusual symptoms and believe you might have CD, GS, a wheat allergy or another digestive condition, reach out to your healthcare provider . Your doctor can help pinpoint what ails you, refer you to the appropriate specialists and begin treatment to alleviate your symptoms. Avoid self-diagnosing your condition or eliminating gluten from your diet before your appointment, which could influence your test results, leading to a misdiagnosis and slower recovery.

And if your tests results reveal that you do not have a digestive issue related to wheat or gluten intake but youre still cutting them out of your diet to slim down or for some other perceived health benefit, you may want to reconsider. While some people may find it impels them to choose healthier foods in general, theres no real evidence that eliminating gluten will help you drop pounds or improve your overall wellbeing. Whats more, if youre not careful, eliminating gluten could deprive you of valuable nutrients especially fiber, but also iron and calcium. Many gluten-free foods are also loaded with added sugar, too much of which is unhealthy in itself.

In the end, the gluten decision is best left to you and your doctor and with a little knowledge, you can make the right choice for your health.

Summary Of The Difference Between Celiac Disease And Gluten Sensitivity 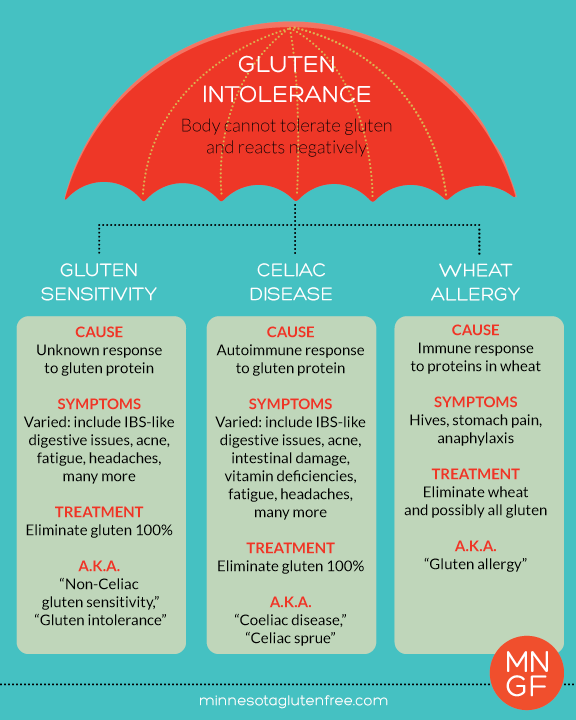 Gluten free diets have risen in popularity, but there are many people who do not understand what being gluten free entails, or why someone would need to be gluten free. Celiac disease and gluten intolerance are both conditions that relate to gluten. While they might have some similarities in their symptoms, there are distinct differences between both conditions. Heres what you should know about celiac disease versus gluten intolerance.

Gluten refers to a family of proteins found in grains like wheat, rye, and barley. Celiac disease is an immune response against these proteins that involves damage to the lining of the small intestine. The disease can be confirmed by a blood test and upper endoscopy.

“Gluten sensitivity is less well-defined,” says Dr. Shirley Paski. “There may be symptoms that correlate with gluten exposure, but no measurable immune response or intestinal damage.”

Symptoms for celiac disease and gluten sensitivity can be similar and include:

Celiac disease can also cause migraines, itchy blisters, and fatigue. If celiac disease is ruled out, your doctor or dietician may recommend an elimination diet trial, which can reveal gluten sensitivity.