Are you ready to try my swirled cinnamon raisin bread recipe? Your house is going to smell amazing as this no-knead raisin bread bakes! It is a winner anytime! If you have ever tasted Greenless Cinnamon Bread , my recipe has a similar soft texture that will have you swooning!!

This recipe makes one loaf of oven-baked, fluffy gluten free cinnamon raisin bread. I will break down this recipe in lots of easy steps so you can get the best results! All you need are a few simple ingredients and patience for rising.

NOTE: I include a TON of tips and tricks so your gluten free cinnamon raisin bread turns out great. Please read through the whole post.

This bread is great to serve with breakfast or for a snack anytime! It toasts well and I love it topped with almond butter, honey and banana slices.

You can also serve it toasted for breakfast with a little butter or ghee and some fried eggs! Its also delicious as-is right after slicing. Experiment with all your favorite toast toppings and go with your cravings ð

Growing up, cinnamon swirl bread was always a special treat. When I was a kid, my family knew someone who had a hook-up at a local Pepperidge Farm factory. They’d invite us to pick up extra loaves that were going to be discarded. I would also hunt through a huge pile of bread looking for all of the cinnamon swirl loaves.

I wasn’t a fan of the cinnamon raisin bread, but the cinnamon swirl bread was my jam! I’d toast it with butter. I’d smear it with peanut butter to make the best sandwich ever.

I have such fond memories of cinnamon bread. I wanted to create a gluten free cinnamon swirl bread recipe I could share with my kids.

On the back of Vivian’s Live Again’s Gluten Free Ancient Grain Muffin Mix there are directions for making gluten free yeast bread.

When I first made this discover, I thought it was the perfect time to try making a gluten free cinnamon yeast bread!

I made gluten free dairy free cinnamon bread, however you can use dairy milk if you prefer. 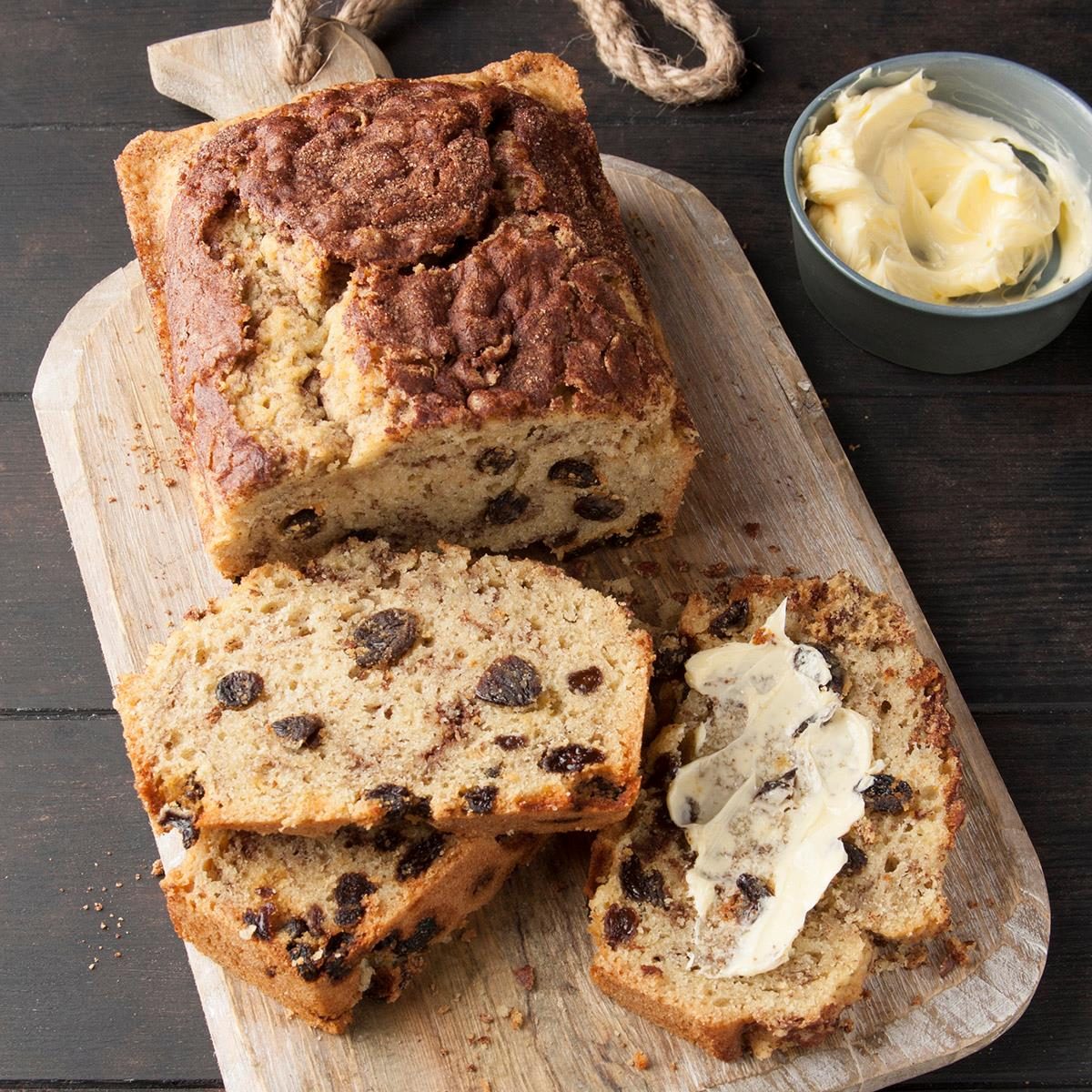 If you want a great gluten free sandwich bread, my friend Erin has a great recipe that I think you’ll love. It doesn’t have a cinnamon swirl, making it perfect for sandwiches.

If youve been following me for a while, you know that I cant seem to stop making new things from old. What I mean is I like to take something Ive already made and use the dough to make something different with it. Im a repeat offender and I cant deny it. From my gf cinnamon roll dough, Ive made: Hawaiian rolls, chocolate babka, kolaches, hot cross buns, king cake, apple fritters, yeast donuts, etc, etc.

And now we can add cinnamon raisin bread to this list!! Its so easy when you already know how to make the dough, as youre already halfway there. If youve never made this dough before, what are you waiting for? Haha! But seriously, if you havent made it before, check out my video on my cinnamon rolls post here to see how easy it is to work with! Its just like REAL wheat dough!!!

Mix And Dump Fast With The Wet Ingredients

So the ‘wet ingredients’ start with mixing the yeast. But as soon as its ready, its full steam ahead with the rest of the ingredients.

Here’s a more complete plan of what to do next:

Set your proportioned ingredients together and start with the olive oil and remaining maple syrup. Add those in.

Quickly add the ground chia and the psyllium husk powder and mix just until combined.

Immediately dump the wet ingredients into the dry and mix it with your wooden spoon.

Work quickly otherwise the wet ingredients will gel up and the dough will become like a way-too-thick lump.

After slicing serve right away. For the leftovers, you can leave the bread loosely covered after slicing at room temperature for the first day.

If freezing, thaw in the refrigerator before toasting to reheat. I like a toaster oven best rather than a pop-up toaster, but either should work well.

I hope youre ready to bake this yummy paleo cinnamon raisin bread! Grab your ingredients and get your oven preheated I hope you enjoy!

Room Temp + Fridge: Store in an airtight container for up to 1 week in the refrigerator, or in a cool, dark environment. This vegan quick bread is best the first 3 days.

To Freeze: Store vegan quick bread in an airtight container or bag, in the freezer for up to 1-2 months. Allow to thaw for about 30 minutes at room temperature before enjoying. Or, heat in the microwave in 15-second increments until just warm.

Why This Recipe Is So Good:

How To Make Gluten Free Bread:

Mix the dry ingredients: I usually mix them together right in my stand mixer.

Bloom the yeast: Then, stir together the warm water, yeast, and sugar. Set this aside for 10 minutes. The yeast should get nice and frothy. The froth lets you know the yeast is active and ready to go. If your yeast doesn’t froth after 10 minutes. Try one more time and make sure the water temperature is correct. If it still doesn’t froth, your yeast has expired. You’ll need to get a fresh batch before making this recipe.

Mix and rise #1: Add the wet ingredients into the dry and mix on medium speed until combined. Add in the raisins and mix until they are evenly distributed into the dough. Shape the dough into a ball, place in an oiled bowl, cover with a tea towel, and let rise for 1 hour.

Rise #2: Once risen, form the dough into a log and place in an oiled loaf pan or bread loaf baker. Cover with a tea towel and let rise for another 45-60 minutes.

Bake: Once risen, place the bread into the oven and bake for 55-65 minutes. Let cool in the pan for 10 minutes. Loosen the sides with a butter knife and invert the pan to remove the bread. Cool completely on a wire rack. Slice and enjoy!

Faq’s For This Recipe

What if my bread machine doesnt have a gluten free setting?

Bread machines are one of my favorite kitchen appliances. They work efficiently and free up so much time! Having guests over? Bake some bread without taking time away from other prep or entertaining. Looking for a bread you dont have to fuss with? This does all the work for you! And the best part is, you dont even need a gluten free setting on your machine. Edit: this recipe used to use the rapid cycle setting .

Can I make this without using a bread machine?

Yes! The ingredients are exactly the same, but the method is a bit different:1. Heat cup of water and cup of milk to 100F. 2. In the bowl of a stand mixer, mix the dry ingredients until combined.3. In the water measuring cup, add yeast to cup of warm water to proof.4. In the milk measuring cup, add oil, vinegar, and honey and stir until blended.5. Add milk mixture and yeast to the mixing bowl and mix for 1 minute on low, scraping the bowl down.6. Add the 3 eggs and increase speed to medium and mix for 3 minutes.7. Stop machine and add raisins. Mix again for 30 seconds.8. Pour batter into a 9″x5″ baking pan and let rise for 45 minutes or until batter crests the top of the pan.9. Preheat oven to 350F. Bake for 50-55 minutes or until instant read thermometer reads 205-210F.This method is also listed below, in the recipe.

What kind of yeast is used in this recipe?How do I know when its properly mixed?Whats the best way to store this bread?

If you love fluffy bread, give my Gluten Free Brioche recipe a try too!

So whaddya think? Was my mom totally right about this vegan cinnamon raisin quick bread or what? I cant wait to hear what you and your loved ones think of my vegan quick bread recipe. Just so you know, its such a pleasure sharing in these sweet, homemade kitchen moments with you. Til the next one

Sending you all my love and maybe even a dove, xo Demeter

Did you make this vegan quick bread recipe? Take a pic and share it on with the hashtag #beamingbaker& tag . Id love to see it!

Is Beyond Meat Gluten Free

What Fast Food Is Gluten Free