Psyllium husks come from the seed of the Plantago plant, a native of India and Pakistan. It is naturally gluten free. It is known as a source of soluble fiber which loves to absorb moisture. This ingredient helps reduce the crumbly structure often found in gluten-free baked goods. It gives the dough elasticity and flexibility and makes it workable. This is why the dough for Gluten Free Cinnamon Rolls has to rest twice . The Psyllium husk will absorb some of the liquid used and makes the dough workable.

Psyllium husk is especially useful in gluten-free recipes which rely on the structure gluten provides. Psyllium interacts strongly with the proteins in gluten-free flours, creating a sturdy enough structure to support highly leavened bread once the bread cools.

You may be tempted to skip this ingredient but I highly recommend adding it to your cinnamon rolls.

Heat the coconut milk and pure maple syrup to about 110 to 115 degrees F in a large mixing bowl . Sprinkle the yeast on top and whisk well until incorporated into the coconut milk.

Allow this mixture to sit for 8 to 10 minutes, until the yeast is very fragrant and the mixture appears foamy.

While the yeast is blooming, add the gluten-free flour, brown sugar, baking powder, cinnamon, and sea salt to a separate bowl and stir until well-combined.

Whisk the avocado oil into the mixing bowl with the coconut milk-yeast mixture and mix until well incorporated.

Stir in the flour mixture and mix until a thick dough forms. The dough should feel moist but not be overly sticky.

Form the dough into a ball and place it back into the mixing bowl. Cover with plastic wrap then a damp kitchen towel and place in a warm part of your house for 1 to 2 hours, or until the dough has about doubled in size.

The amount of time this takes will be dependent on the temperature of your house. If you keep your house warm, it will take about an hour. If you have a bread proof function on your oven, you can use it!

Roll Out the Dough:

Lay a sheet of parchment paper on your counter and sprinkle it lightly with gluten-free flour.

Transfer the cinnamon roll dough to the center of the parchment paper, and press it with your hands into a rectangle that is about ¼-inch thick. .

How Do You Make Gluten Free Cinnamon Rolls From Scratch

If youve ever tried making cinnamon rolls, either gluten free or non-gluten-free, you know that its a process its definitely not the same as opening a can and popping them in the oven. But the end result is soooo worth it. So is knowing exactly what went into them! My first recommendation in making cinnamon rolls from scratch is planning ahead with time. Youll need to give them time to rise, so allot for that. You cant just whip these up in 30 minutes, but there is beauty in the process. The steps specifically:

Also Check: Alcohol That Has Gluten

How Do You Make Cinnamon Rolls Rise

Cinnamon rolls rise the best in a warm location. I rise my cinnamon roll dough in my oven.

If you do not have a proofing mode on your oven you can set your oven to the lowest setting and turn it off once it reaches 100°F.

I proof and I bake the cinnamon rolls on the middle rack. I never want the rolls to touch the top of the oven rack. 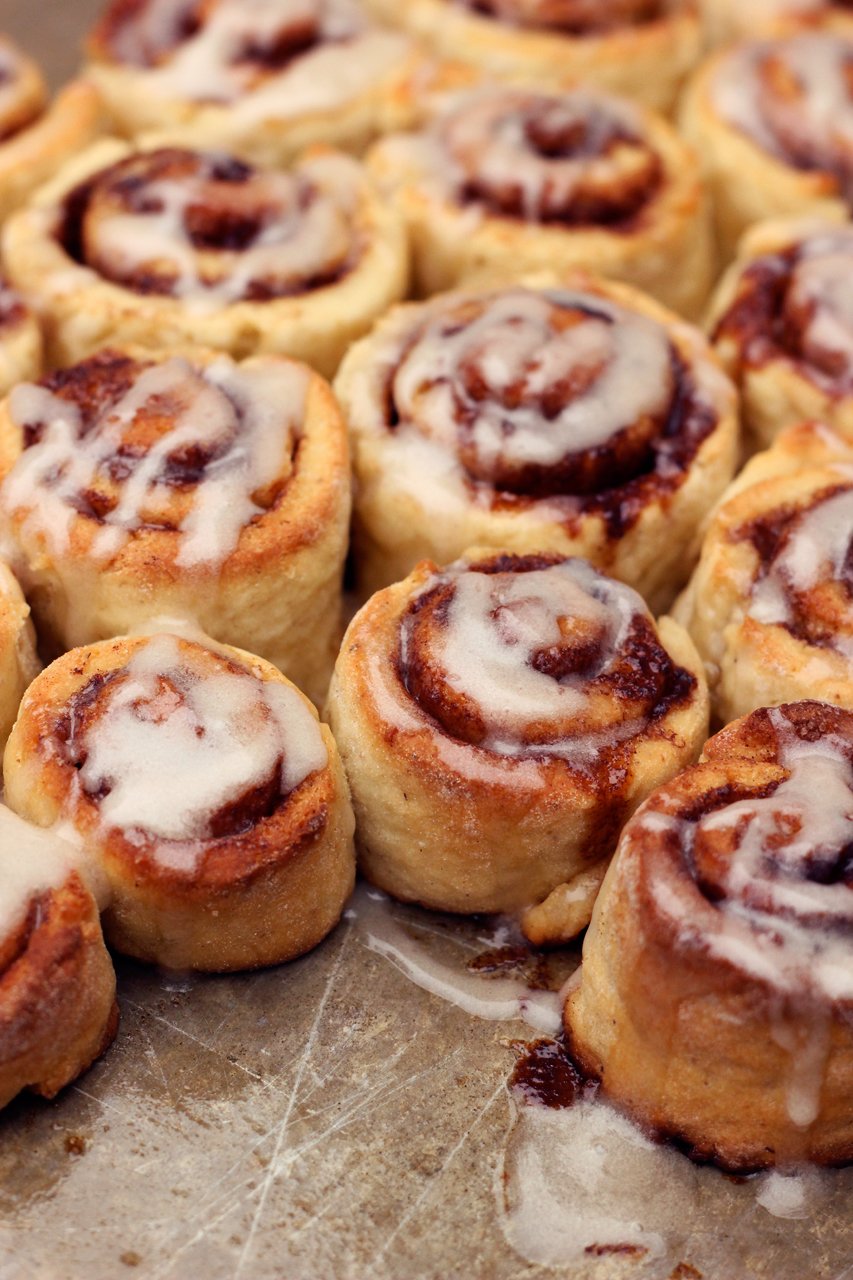 Soft, Yeast Free Cinnamon Rolls are the easiest way to enjoy your favorite breakfast dish. These cinnamon rolls are light and fluffy with a gooey cinnamon sugar middle topped by a luscious cream cheese frosting.

And as an added bonus there is no rise time, no punching down dough, and no failed gooey globs that didnt turn out. This recipe has never failed me.

We enjoy this mouthwatering cinnamon roll recipe for holidays, birthdays, and any other reason we can come up with.

Ive been using this recipe for the several years. It was adapted from a recipe found on the Gluten Free on a Shoestring website here.

I tweaked the ingredients and substituted in dairy free products and added in an amazing cream cheese frosting.

Then I added a dairy free cream cheese frosting to the top and now Ive tasted the perfect Yeast Free Cinnamon Roll. Each bite just melts in your mouth.

This recipe has become a family tradition for holidays such as Thanksgiving and Christmas. Ive even added it to the menu to celebrate the last day of school or birthdays.

Since youre not waiting hours for the dough to rise, a batch of warm cinnamon rolls can be whipped up quickly.

Or if youd prefer to sleep in longer, bake these the night before, reheat in the morning and ice with cream cheese frosting just before serving.

How To Properly Store And Reheat Your Leftover Homemade Cinnamon Rolls

You can also freeze your cinnamon rolls for up to two weeks. I suggest wrapping each homemade cinnamon roll individually and placing them in a ziplock bag. You can freeze the rolls, baked but unfrosted. Later, you can thaw them out, warm them for just a few minutes in the oven, and ice them while warm. Or you can freeze the rolls completely iced and finished. Just allow them to cool, then cover with plastic wrap and foil.

Check out my list of Top 10 Allergy-friendly breakfast recipes for more morning inspiration!

Have you tried this Yeast-Free Homemade Cinnamon Rolls recipe? Tag me #gristleandgossip on , , and . I love sharing your creative content and suggestions with my followers.

For The Cream Cheese Icing:

Looking for a warm, soft and fluffy cinnamon roll made from scratch? These Gluten Free Cinnamon Rolls are a must-have menu item for any holiday or weekend breakfast and brunch. Theyre soft, fluffy, delicious and way better for you than the ones you can get from your local bakery, and they accomodate a handful of dietary restrictions. Say hello to your new feel-good homemade breakfast.

Can I omit the extra xanthan gum?

Please do not omit the additional teaspoon of xanthan gum, even though its in your gluten free 1:1 baking flour. Just a touch more helps with the oat flour, and is crucial to the success of the recipe.

Where can I find psyllium husk powder?

I picked mine up at Whole Foods, but its also available online.

Can I use a different Forager Project product flavor in the recipe?

Of course! These cinnamon rolls also work with their oatmilk and cashewmilk. The yogurt can also be vanilla or unflavored.

Can I use regular dry active yeast?

Unfortunately, you really do need instant yeast. This is because gluten free dough already takes a long time to rise, so youd be waiting quite a bit longer!

Dont worry- you probably have done nothing wrong, and all you need is a warmer environment and patience! One thing about regular dough is that you can see if its working pretty easily- you get that instant reward after just an hour, and your dough has magically doubled in size. With gluten free dough, its like watching grass grow: doesnt seem like its doing anything but give it patience and a warm environment, and its actually grown!

Can I make these cinnamon rolls overnight?

What Dairy Free Butter Should I Use

We used the Country Crock avocado oil plant butter sticks in this recipe, but I think that any brand of dairy free butter should work in this recipe .

Earth Balance Soy Free is also a great soy-free butter alternative that would probably work great in this recipe. Miyokos also makes a cultured oat milk dairy free butter now if you want to try that brand but cant have their regular cashew recipe!

The Miyokos oat milk butter is really good and super creamy, but my body doesnt like cultured products since I think I have a histamine intolerance. So I couldnt have too much of that butter before I started having headaches But if you can have it, its delicious!

Check out our other gluten free cake recipes!

NOTE: If you are adding xanthan gum to the batter , it is VERY important not to over mix.

Gluten free cinnamon rolls are the BEST way to celebrate any occasion, but I highly recommend them for a gluten free brunch recipe on Christmas morning or New Years day!

You are just going to fall in love with these unbelievably gluten free vegan cinnamon rolls. Seriously, weve cracked the code to the best dang cinnamon rolls around that everyone will love, gluten free and/or vegan or not! Follow this recipe below for a soft and melt-in-your-mouth cinnamon roll with that classic gooey and sweet cinnamon filling and glaze!

This post is in collaboration with Forager Project, my absolute favorite dairy-free and vegan food company! Youve heard me speak about Forager Project many times in my recipes, and Im so grateful to bring to you a recipe we worked together on that I just know youll love! T

How To Make These Cinnamon Rolls Dairy Free 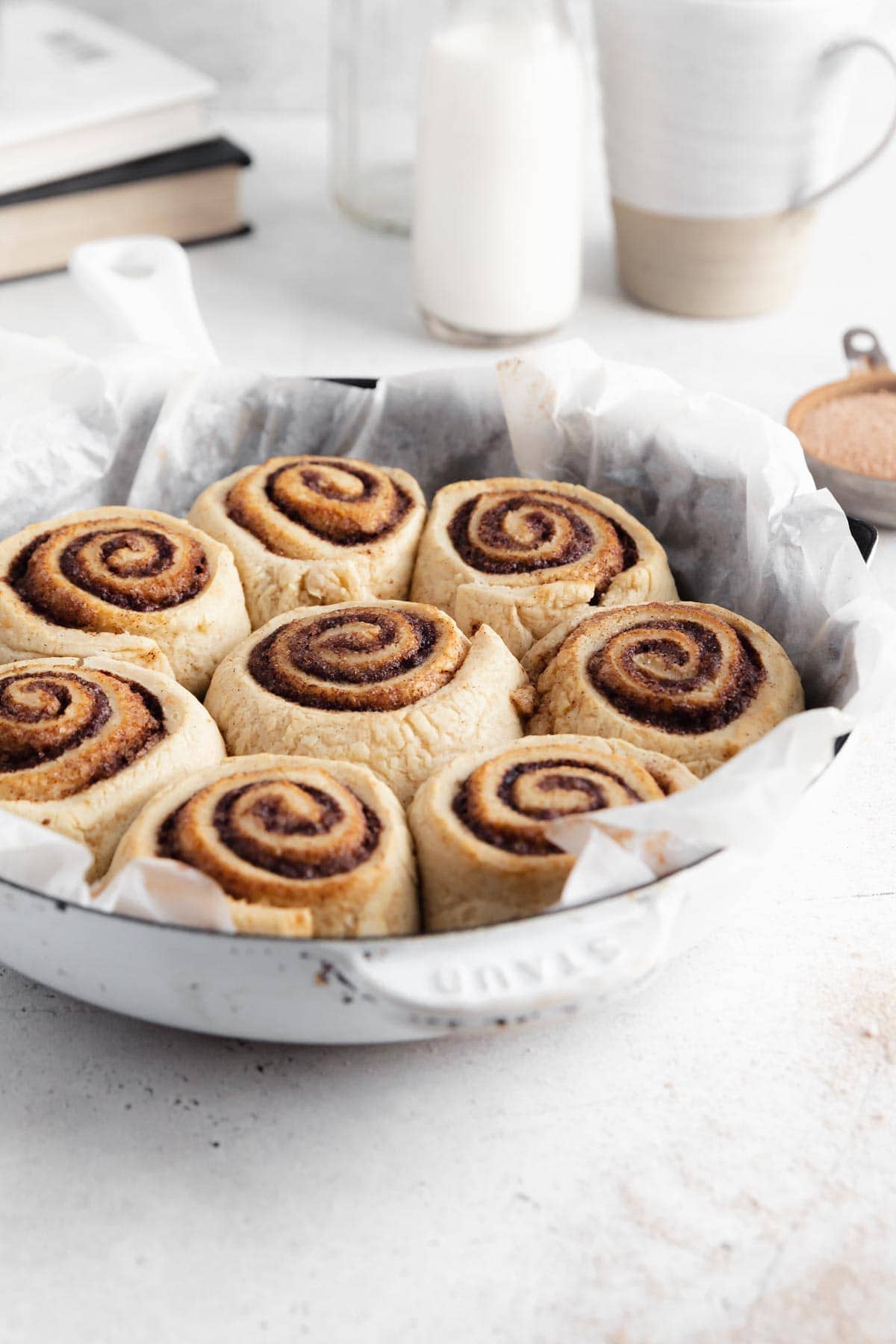 Like I promised, this recipe can be made dairy free by swapping the Greek yogurt with 1 ¼ cups canned coconut milk of your choice plus 3 teaspoons lemon juice or apple cider vinegar. Give the mixture a stir and allow to stand for 10 minutes before adding to the dough.

Swap the regular butter with a vegan alternative or coconut oil and you have dairy-free cinnamon rolls!

When any food allergies or intolerances are present, finding recipes the whole family enjoys is TOUGH. Getting a meal plan down pact makes all the difference and many families have had major success with our dairy and grain-free meal plans. Get the full scope on any one of our family meal plans here.

Perfect Glaze For Your Gluten

The sweet, shiny glaze is definitely my kids favorite part about these Gluten-Free Cinnamon Rolls and its so easy to make! Butter, sugar, vanilla, and water, thats it!

Next step, is choosing who gets to drizzle the fresh rolls with icing. Anyone elses kids fight over this job?

You dont have to stop with these Gluten-Free Cinnamon Rolls. Or youre in the mood for cinnamon, I have a lot of other kid-friendly breakfasts that your family is going to love.

Scrape down the sides of the bowl then place it somewhere warm to let the dough double in size, about 1 hour. I use my ovens bread proof setting, though in the past Ive placed the bowl on top of a heating pad set to low. A warm sunny spot should work too!