What Is The Healthiest Thing To Eat At Taco Bell

The Veggie Power Menu Bowl with easy rice offers 11g protein, 12g fiber, and 340 calories, along with 90 percent of the daily value of vitamin C.

Aside from the Veggie Power Menu Bowl, there are a few other healthy options to eat at Taco Bell. You could also try the Cheesy Toasted Breakfast Burrito , Bean Burrito , or a side of black beans and rice .

Allergen Disclaimer from Taco Bell: Like most restaurants, we prepare and serve products containing egg, milk, soy, wheat or other allergens. The Food Allergy & Sensitivity information on this site is based on standard product formulations and is current as of the last update. While a particular ingredient may not contain these allergens, our products may be prepared on the same equipment and in the same kitchen area as those that do. We cannot guarantee that cross contact with allergens will not occur.

In addition to providing the nutrition info for its menu items, Taco Bells website also offers a tool to help people avoid allergens, including fish, dairy, nuts, soy, eggs, and gluten. However, if you have food allergies, its important to keep in mind that even if a dish doesnt contain the allergen, it may have been prepared near the allergen.

Many items on Taco Bells menu use meat and dairy. While you can order many meals without meat or milk-based ingredients such as sour cream or cheese, be aware that these items may have been stored or prepared alongside the ingredients youre trying to avoid.

For example, if you are vegan, you will need to ask if the Taco Bell location you are visiting uses the same fryer for meat and non-meat products.

While Taco Bells menu does not feature peanuts, tree nuts, fish, or shellfish, other ingredients used may have been produced in facilities that also produce those allergens.

Nutrition Facts for Taco Bells Cool Ranch Doritos Locos Taco Supreme is as follows: Total Calories of 200. Calories From Fat are 100, Total Fat is 12 grams, Saturated Fat is 4.5 grams, No Trans Fat, Cholesterol is 35 mg, Sodium is 370 mg, Total Carbohydrates are 15 grams, Dietary Fiber is 3 grams, Sugars at 3 grams and Protein is 9 grams. The following are the known allergens for the Cool Ranch Doritos Locos Taco Supreme: milk, wheat and soy. Also contains Gluten and MSG that may cause sensitivity for some people. Note: the Crunchy Taco Supreme does not contain MSG.

Taco meat is the most contested of the ingredients of a taco besides the tortilla itself.

Taco meat is gluten free as long as the seasonings are free from gluten, wheat, rye, and barley products. Seasonings can contain anti-caking ingredients that contain gluten. Always check the ingredients and read the label for a gluten free statement by the manufacturer.

Sometimes wheat products can be used as fillers to make it appear that there is more meat than there actually is. And statements regarding meat can be intentionally misleading as well.

Here are some questions to ask regarding taco meat. What ingredients do you use in your taco meat? Are your seasonings gluten free? Do you cook the taco meat separately or next to items that contain gluten?

This is especially vital on a food cart. As a previous food cart owner, I can testify to how little space there is to cook and prep, even in the most organized mobile kitchen. It is effortless to cross-contaminate between foods, even with the best of intentions. Most food carts do not have a larger grill than 24 inches for all the foods they cook on it.

Does Taco Bell Have Gluten

In short, yes. Taco Bell does have some food options available that do not have any gluten-containing ingredients. However, the preparation method of Taco Bell food means that there is no guarantee that there has been no cross-contact with foods that do contain gluten. They have no separate equipment, which means it is a risk.

Taco Bell® does not claim gluten-free for any of its food. Some Taco Bell® items are made without gluten-containing ingredients but are prepared in common kitchen areas, including common fryer oil, risking gluten exposure. Taco Bell® does not recommend products for customers with celiac disease. Customers with gluten sensitivities should exercise judgment when ordering.

They want to protect themselves and us, so are extremely honest in that statement. Some gluten intolerant individuals can consume Taco Bell just fine, but its all down to the individual and how comfortable they feel eating there. You can find their full statement about allergens here.

On their website, Taco Bell states the restaurant “does not claim “gluten-free” for any of its food. Some Taco Bell® items are made without gluten containing ingredients but are prepared in common kitchen areas, including common fryer oil, risking gluten exposure. Taco Bell® does not recommend products for customers with celiac disease. Customers with gluten sensitivities should exercise judgment when ordering.”

With that statement, Taco Bell puts safety into the consumers’ hands. It is up to the consumers to make the choice to eat at Taco Bell or not when living with Celiac disease or gluten sensitivity.

Crunchy tacos and crispy tacos often get confused, which is understandable! This is something that needs to be checked on closely when ordering.

The confusion between crispy and crunchy tacos can be extremely frustrating and confusing. When looking at either term on a menu, I highly recommend checking on the ingredients in the taco shell or skipping it altogether.

What Taco Bell Can Do To Expand Its Gluten

Having said that, I believe Taco Bell should build on the Power Bowl by adding more items to its menu to stay competitive and in the right direction. Offering the gluten-intolerant an option that lets them put the insides of the burritos in a bowl, where they can put the rice on top of it, would definitely give them more options to choose from. In the present state of affairs, its nice to know there are a few meals that I can eat , but obviously, they could do better.

Taco Bell® does not claim gluten–free for any of its food. Some Taco Bell® items are made without gluten containing ingredients, but are prepared in common kitchen areas, including common fryer oil, risking gluten exposure. Taco Bell® does not recommend products for customers with celiac disease.

Additionally, what is in the rolled chicken tacos at Taco Bell? Taco Bell’s new Rolled Chicken Tacos feature shredded, seasoned white meat chicken rolled up in a corn tortilla and deep-fried. An order of four costs $3.99 and included two sauces for dipping .

Also Know, is the chicken at Taco Bell gluten free?

Apparently the ground beef contains gluten, but you can sub shredded chicken on a crunchy taco. Their Power Bowls are great – you get fresh ingredients, and you can choose from chicken or steak. It’s also my understanding that the chips and guac/salsa are gluten free too.

Taco Bell: Not so gluten–free. The only item that didn’t contain wheat and gluten was the nachos and cheese. The hard tacos and nachos do not contain any wheat ingredients, however according to this list of ingredients the beef does.

Your best options for gluten-free fast food include:

Can I Eat Taco Bell And Still Lose Weight

This is a healthy rate of weight loss at a little over 2 pounds per month. She says that she reduced her calories to 1250 per day while still eating meals at Taco Bell. The fact is that most people who reduce their intake to 1250 calories per day are likely to lose weight, whether they eat at Taco Bell or not. 4. 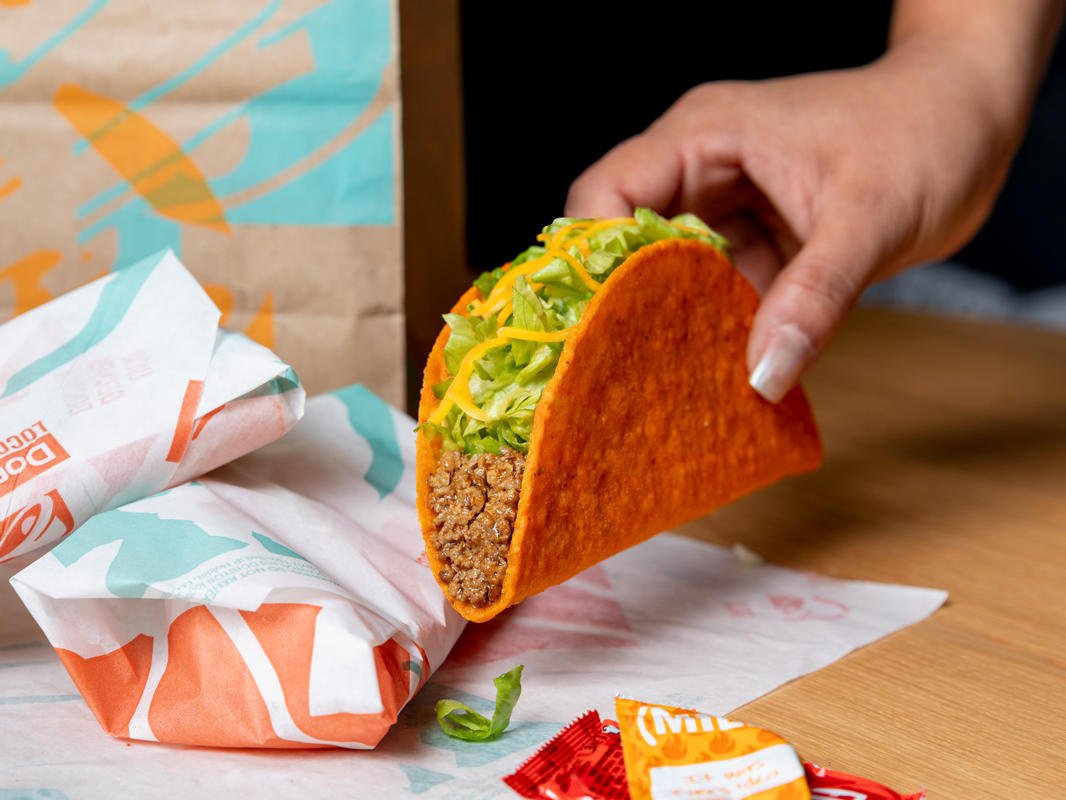 In a sprayed 9 by 13 pan, spread ½ of the crushed Doritos and top with ½ of the beef mixture. Repeat. Top with cheese. Bake 15 minutes, covered with foil, or until the cheese is melty. If desired, turn the oven to broil and broil the casserole, uncovered for a couple of minutes to brown.

This spicy and savory Mexican spice blend tastes just like Doritos®, but without the junk! Use it to spice up healthy alternative snacks, etc. Vegan, vegetarian, low calorie, gluten-free diet friendly.

Assembling the salad. Set out four bowls or containers and add 1.25 ounces of spring mix to each. Complete each serving with half of a diced tomato, half of a chopped avocado, ¼ of the meat mixture, and 1 ounce of shredded cheese. For a little crunch, top each salad with 2 Parmesan crisps broken into pieces.

Corn tortillas are now made with Masa Harina, a special type of cornmeal. Although it should naturally be gluten-free, there is a gluten cross-contamination problem during processing and packaging. In factories that also process wheat, rye and / or barley, various masa-harina products are shredded and packaged.

The Spicy Tostada At Taco Bell

The Spicy Tostada is a good choice if you want something a little less mild. Served with crunchy tostada shells, it is a simple dish consisting of refried beans, tomatoes, lettuce, and spicy sauce. If you dont pay attention, you can make a mess fairly easily. The sauce actually tastes pretty good and stays pretty firm.

You dont have to eat at Taco Bell every day, but you can enjoy it occasionally. Often you just need food no matter how strongly you disagree with the idea. You should take your lunch everywhere you go. You get tired of it. Frozen dinners that cost $8 are irritating. The restaurants that are nearby can limit where you can eat. I appreciate having even just a tub of beans and rice as a fast-food option nearby sometimes since Taco Bell is the only fast food option that isnt a salad.

The meat at taco bell is prepared without ingredients that contain gluten and 2 of their taco shells are also safe for most gluten-free diners the Crunchy Taco shell and the Doritos Locos Taco shell.

If youre not looking for tacos, you can also enjoy a bowl from their Power Menu, with chicken, steak or ground beef and any of the other gluten-free ingredients we have listed below. Top it off with a bit of mild or fire sauce and you have a tasty gluten-free meal!

Is Diablo Hotter Than Fire

Get A Free Doritos Locos Taco Today From Taco Bell

Diablo will be made with a variety of peppers, including aji panca, chipotle and chili, Taco Bell spokeswoman Ashley Sioson told AdWeek. Foodbeast actually got a hold of some Diablo and reports that compared to Taco Bells traditional Fire sauce the taste is actually really good and its noticeably spicier than Fire.

Have a craving for your favorite fast food taco but want to try it at home? This homemade Doritos Locos Taco recipe is perfect for you. Ground Doritos make a perfect cheesy taco shell, while the well-seasoned meat mixture closely replicates the original. Serve this up for a few guests and see if they think homemade is better than fast food.