Why Is This The Best Basic Gluten Free Pizza

For so many years, this was my tried and true pizza crust recipeuntil I wrote Gluten Free on a Shoestring Bakes Bread. When I wrote that book, I thought I had turned the page from recipes like this basic crust forever.

This recipe, and others like my gluten free sandwich bread and Japanese milk bread use only an all purpose gluten free flour blend instead of the bread flour blend with whey protein isolate in it from the book.

If youre curious about the newer pizza recipes, the Thick Crust Gluten Free Pizza from the book is reprinted right here on the blog. You can find out how to make our gluten free bread flour on the flour blends page.

But this recipe has slowly worked its way back into our regular Friday night rotation, and Im finding that in some ways my family and I actually prefer it to the newer recipes. Let me explain

Previously, when I first published this recipe I used palm shortening instead of the olive oil that is now listed. While that works equally as well, a lot of readers dont commonly keep palm shortening on hand. We tested this with olive oil and love the results, so weve updated the recipe to call for that instead. If you know and love this with palm shortening, you can still go ahead and use equal the amount of that.

What Makes A Great Pizza

There are all kinds of pizzas out there: thin crust, thick crust, Sicilian, etc, etc. Im not a pizza snob. I will eat just about any pizza thats put in front of me. But I WILL NOT eat cardboard with sauce and cheese! And that, my friends, is sadly what is offered to us gluten free people.

Even if we felt like risking everything and ordering a gluten free pizza from a local pizza place, its nothing more than cardboard with sauce and cheese.

I LOVE my own gluten free pan pizza, but I also love New York style pizza. You know, the kind that you can fold over that is slightly crispy and chewy at the same time, with bubbles of dough that have risen and created craters. This pizza has all of those wonderful traits and you can make it at home!! No more cardboard for us. Woohoo!!!!

Can I Freeze A Gluten Free Pizza Crust

Yes, you can easily make your crust ahead of time and freeze it for later use! Just prepare the dough, shape it, and bake it for 8-10 minutes.

Take it out of the oven, and when its completely cool, wrap it well in two layers of plastic wrap . Freeze it for up to one month, and let it thaw out in the fridge before you make your pizza.

But Whats Baking Powder Doing In My Pizza 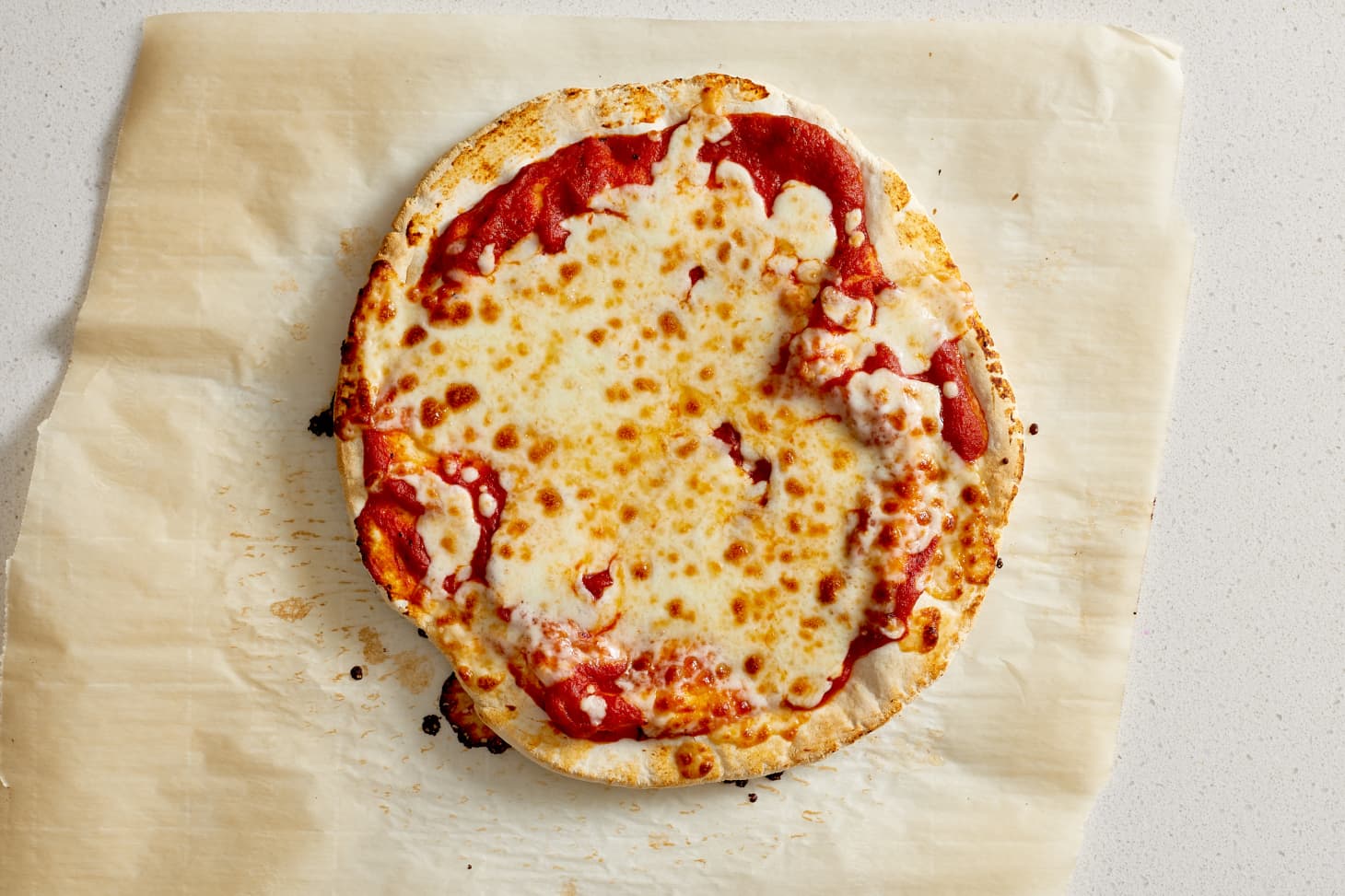 Theres actually a very good reason for adding baking powder to gluten free pizza dough. While xanthan gum ensures that gluten free dough has a certain degree of elasticity, it cant completely replace the strands of gluten that form during prolonged kneading of wheat-containing bread.

No matter how annoying gluten can be, it does have an important role in breads and other doughs. And its not all just about elasticity and flexibility. Its about trapping gas bubbles as theyre formed by the active yeast during the proofing process. And Im sorry to say that gluten free doughs, no matter how brilliantly prepared, just arent as good at trapping these gas bubbles as your average wheat-containing dough. Its tough, I know.

But this doesnt mean that alls lost. It just means we need to be more clever about how to get to the perfect gluten free pizza dough. Enter baking powder. While the yeast does give the gluten free dough a bit of a rise before baking , the baking powder ensures that the pizza dough gets an extra boost while in the oven.

The result? Nothing more and nothing less than pizza crust perfection.

Making homemade gluten-free pizza recipe has always been comforting to me. In a lot of cases, you’ll make the gluten-free pizza crust recipe in about as much time as it would take to get delivery or run to the store, so it’s not that much of a time sacrifice when you think about it.

This is the BEST gluten free pizza dough recipe! Its so easy to make, perfectly chewy and requires no kneading. Plus, this crust can be frozen for easy dinners throughout the week!

My go-to gluten free pizza dough! This crust recipe requires no kneading, is totally freezer friendly and can be made into a thick or thin crust depending on what you like!

It only requires about 15 minutes of prep time, plus an hour to let the dough rise and then youre good to go! Pizza was one of those foods I missed most when I was diagnosed with Celiac, and while I love a cauliflower crust every now and then, sometimes you just need something that more closely replicates the real deal.

This crust is thick and chewy and will definitely become a regular in your meal rotation!

While this recipe is not vegan friendly, you can try my vegan and gluten free pizza crust instead which is just as delicious and made without egg!

If you try this recipe, let us know! Leave a comment, rate it, and dont forget to tag a photo #minimalistbaker on Instagram. Cheers, friends!

Note: based on reader feedback and retesting, we reduced the pre-bake time by 5 minutes on 10/17/2021 to ensure a perfectly baked crust every time!

Can I Use A Toaster Oven To Make Pizza

I have never used a toasters oven to make pizza, but I have used one to reheat pizza.

If you make this gluten-free pizza dough in a toaster oven please come back and tell me about your experience.

If I ever I make this gluten-free pizza dough in a toaster oven I’ll make sure to update this post with my results.

Making Your Home Oven Behave Like A Pizza Oven

I used to make pizzas quite often from scratch before I became gluten free. So I always tried to recreate the effects a pizza oven would give for the best possible outcome. Ive found a pizza steel to be the best option. Ive had other pizza steels that were cheaper, but they were never as good as this one so look at it as you get what you pay for. Theyre great for mimicking the effects of a pizza oven because they conduct heat 20 times better than a stone would. Id also be lost without my pizza peel for launching the pizza into the oven.

Put your pizza steel on the middle rack of your oven and preheat it to 500 degrees F. Allow it to preheat for at least 30 minutes. When you slide the pizza onto the steel, the crust will bake first at 500 degrees, for about 6-7 minutes. Then youll switch to broil to melt the toppings until bubbly, creating the best gluten free pizza youll ever have!!

Quick Guide: How To Make Gluten

This gluten-free pizza crust recipe yields 3 10-11 Pizzas. If youd like to freeze one or two, do so after par baking, then thaw at room temperature just prior to topping the pizza and baking. In summary, heres how to make the recipe :

Its almost ready! now, pile on the toppings de jour and bake the pizza for about 8 minutes.

What Is Gluten Free Pizza Crust Made Of

This yeast dough starts with one cup of warm water. It should be about body temperature or slightly warmer. Be careful not to use hot water, which will kill yeast, and cold water, which wont allow it to activate. 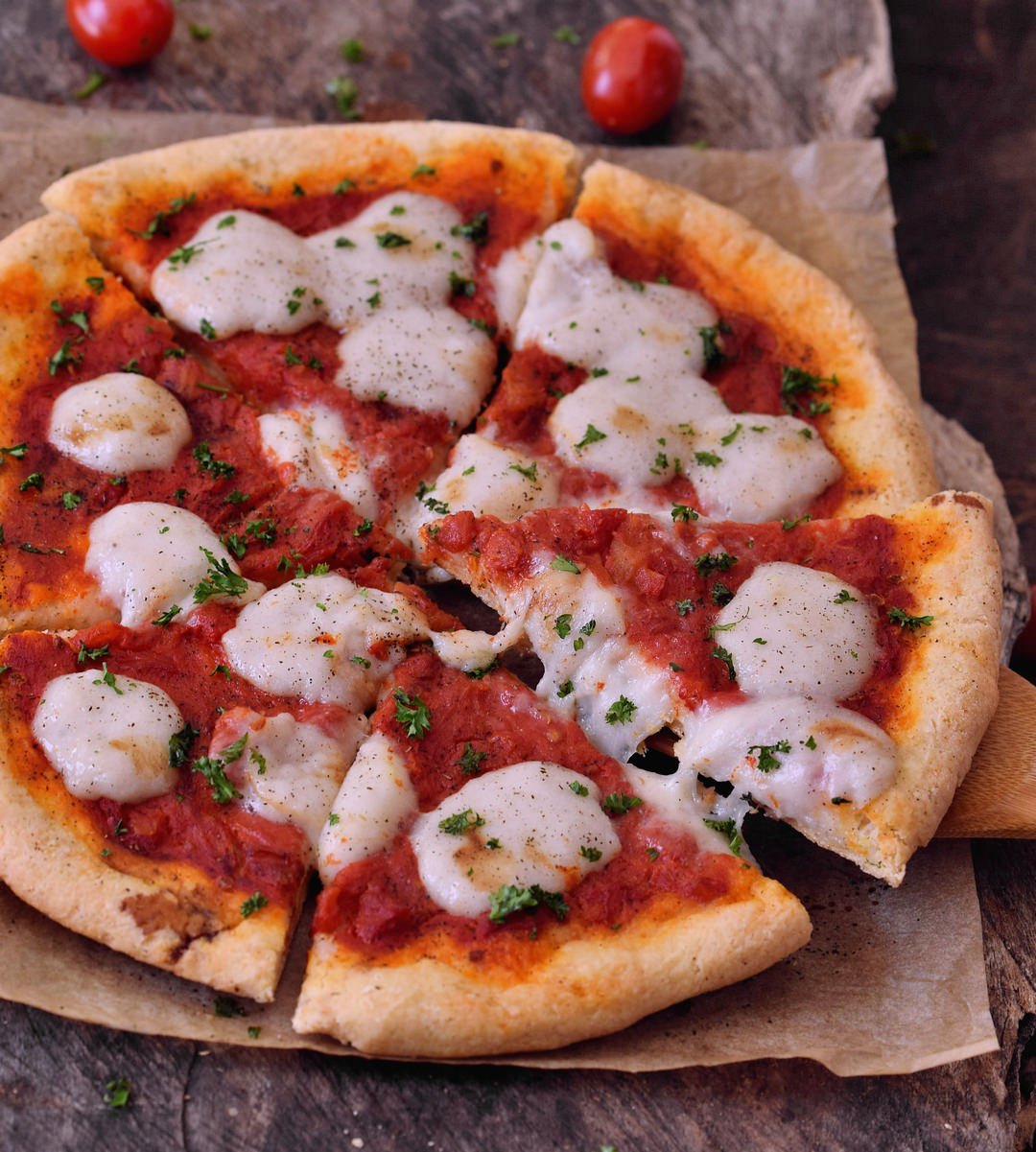 Youâre looking for a new best premade gluten free pizza crust. Think about it. It’s impossible to foresee pricing fluctuations in the future. The sooner you buy, the better off you’ll be if manufacturing doesn’t slow down. If, on the other hand, production is falling and prices are expected to climb, you might want to hold off on making a decision until the hype has calmed down.

Gluten free doughs tend to be a bit more sticky than traditional wheat flour pizza doughs. Greasing your baking surfaces will stop your crust from sticking to the sheet or pan that you’re using. Using a silicone baking mat is also a great way to keep your crust from sticking. These non-stick baking mats are often used as a replacement for parchment paper and they don’t require any greasing.

First, I highly recommend getting a pizza stone if you don’t have one. It really makes a huge difference when you make gluten-free pizza.

But no worries. If you don’t have one, simply use a heavy baking sheet.

If you don’t have a heavy baking sheet then you can use a cookie sheet. Let it preheat in the oven just as you would a pizza stone.

You can do this before you make your gluten-free pizza dough.

Enjoy pizza night again with this Thick and Chewy Gluten Free Pizza Crust. This crust is soft and chewy, but strong enough to hold up to whatever toppings you put on it.

Last summer I posted a crisp gluten-free pizza crust recipe that was for a thin, crispy pizza crust.

This crust recipe is for those that like a slightly thicker, soft, chewy, bendable, holdable, and foldable pizza crust. Now there is something for everyone.

They have some seriously good pizza there, plus they have some pretty wild topping ideas, but so delicious. I would never thought of mashed garlic potatoes on my pizza, but it is so good!

I thought of that pizza the whole 8 hour drive home, trying to figure out how I could recreate such a chewy crust. After a little playing in my kitchen, I figured it out, and weve been enjoying it a few times a month ever since.

They went back for seconds. And thirds. Yes teen approved!

How To Make Thin Crust Pizza

Heres a note from a reader:

Hey Jeanine, the frozen pizza crust experiment was a success. I made your chewy pizza crust, baked 10 minutes as directed and when they cooled I put wax paper between them and threw them in the freezer. A week later we thawed them, added toppings, and they turned out every bit as good as fresh.

If youd like yet another way to prepare several of these yummy gluten free pizza crusts in advance, freeze them and bake them later all at one time hop to In Angelas Kitchen for her how-to photos of how to make your own frozen pizzas with my mix! Angela:

Working with only 4 crusts at a time, mix together 4 crusts according to the package directions. Divide pizza crust between 4 prepared trays. Drizzle a bit of olive oil over each crust. With well oiled hands, pat out pizza crusts, leaving a ridge at the edge to contain toppings.

To bake: unwrap pizzas and remove from trays. Place pizza on your favorite pizza baking pan, pizza stone or directly on the baking rack of the cold oven. Close oven door. Set oven to bake at 400 degrees F. Check pizza after 25 minutes. Depending on toppings, bake for another 15 to 20 minutes until crust is baked through and toppings and bubbly and cheese is melted. Enjoy!

I hope you love this recipe as much as we do!

Pin it for later!

Does Jimmy Dean Sausage Have Gluten