How Sourdough Bread Is Made

For thousands of years, bread production relied on the use of a sourdough starter as the leavening agent vs. a store-bought yeast. A newbie sourdough starter is created in five or more days, and requires you to feed the starter with flour and water daily. You can even buy aged starters, which are known to have more flavor and richness.

Its only in the past 150 years, with the advent of bakers yeast as a leavening agent, that bakers abandoned this traditional slow-baking process. In fact, the use of a sourdough starter, which is a biological leavening agent, is near extinct in a world where bread is baked fast and cheap.

Whilst we dont usually advocate the use of starter cultures , gluten-free starters sometimes need an extra leg up! So, if youre looking to bake gluten-free sourdough at home, Cultures for Health sell an excellent starter culture just add water and gluten-free flour. And its available for shipping in the US and Canada.

We have our very own gluten-free Mountain Loaf available to purchase online for in-store pick up at our plant-based bakery in Whistler, BC.

Please note, whilst we do make gluten-free products in our bakery, we cant guarantee that they are suitable for celiacs as they are produced in the same space as our gluten-based products.

How to make gluten-free sourdough

Gluten-free sourdough starters can take time to cultivate and require more maintenance than glutenous starters. But the resulting sourdough is totally worth it!

Alternatively, if youre using a starter culture like Cultures for Health, check out this video for more instructions on how to bake gluten-free sourdough:

The Ratios Of Sourdough

Youll hear people saying things like 100% hydration or 85% hydration when talking about sourdough.

I would recommend not getting too caught up in hydration ratios. I mostly ignored them while I learned all about sourdough, and that works well for me. The only time I really refer to them is when talking about my starter, which I feed with about 100% hydration. All this means is that youre feeding 1 part starter to 1 part water to 1 part flour.

Gluten-free flours vary far more widely in absorbency than traditional all-purpose flour does, which means its more important to look out for the right consistency in gluten-free sourdough starter, rather than precisely the right ratio. Many times with my gluten-free flours, I find I need more water than flour because the flour is so absorbent.

Once youve scored, or slashed, your bread, you need to get it into the oven quickly. If using a Dutch oven, open the oven door and carefully lower the bread, parchment and all, into the Dutch oven. Be careful not to burn yourself. Immediate cover it with the lid and close the oven door.

Bake the sourdough in the Dutch oven with the lid on for 40 minutes. Remove the lid and continue baking for another 20 minutes. If using the baking steel, bake the bread for one hour.

Remove your beautiful loaf of sourdough from the oven and allow it to cool completely before cutting. 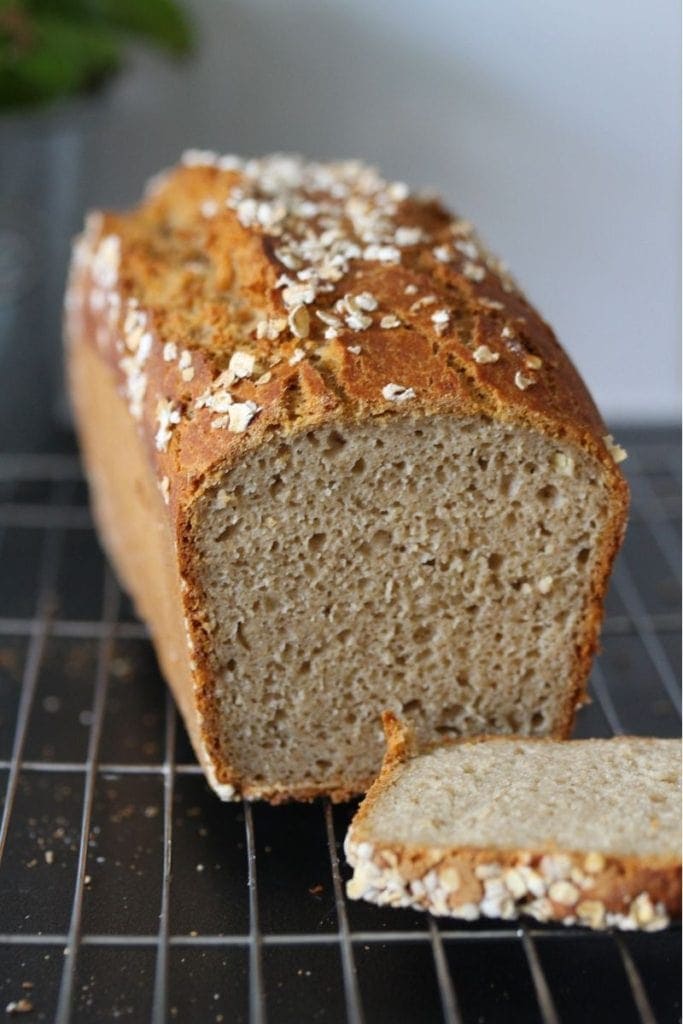 In a small trial conducted in 2010, celiac patients showed no sign of toxicity after a 60-day diet of sourdough baked goods .

These results have led some to speculate that sourdough is safe for celiacs. However, these baked goods were created in a lab and the fermentation process was carefully controlled so that only residual amounts of gluten remained!

Therefore, although the study has given us insights into biotechnology that could be used to reduce gluten content without affecting the workability of the dough, store-bought and homemade sourdough bread are NOT suitable for those with celiac disease.

Instead, we recommend eating gluten-free sourdough!

You May Like: Gluten Free Graham Cracker Crust Trader Joe’s

What Makes Sourdough Easier To Digest

The wild yeast and bacteria in a sourdough starter break down some of the carbohydrates and proteins found in flour, says Kate Scarlata, a Boston-based dietitian and author of The Low-FODMAP Diet book. When bread is made with fast-rising yeast, the bacteria dont have time to do any pre-digesting.

When you add bakers yeast, that speeds the process of the rising of the bread, and it doesnt give the fermenting event enough time to really happen, Scarlata says. It should be a 12-hour-plus process for best digestibility.

The process also breaks down a carbohydrate found in wheat called fructan. We know from our research that in a large proportion of people its the fructans in foods that theyre sensitive to as opposed to the gluten, Varney says. When you limit foods containing gluten, you also limit exposure to fructans, which will help symptoms in those people.

With gluten flour, youre either activating the gluten or avoiding gluten development, said Devlin. For example, when making chewy bread, you want gluten development, whereas with crumbly cookies, you want to avoid it. With gluten-free baking, youre thinking, how can I support the flour to get the result that I want? Gluten-free baking requires a few extra ingredients to provide additional structurenamely hydrocolloids, starches, binders, and fats.

A hydrocolloid refers to something that can be combined with water to form a gel. In gluten-free breads, hydrocolloids perform similarly to gluten by binding water in a matrix, thus helping the bread expand and rise. Goyoaga, Devlin, and Lowe all rely on psyllium husk powder. Psyllium husk does not negatively impact crumb texture in the same way all other hydrocolloids do, said Lowe.

Unlike wheat-based sourdoughs, gluten-free doughs made with psyllium husk powder are not extensiblethey cannot stretch. In other words, gluten-free breads have a harder time expanding around large air bubbles formed during fermentation. As a result, fermentation tends to be shorter and the dough is much more delicate. For best results, seek out a high-quality, finely ground psyllium husk powder. Goyoaga recommends purchasing from Terrasoul Superfoods.

Only fresh spring water and the most nutrient-rich gluten-free grains go into our sourdough-based gluten-free breads. We source top quality rice, corn, millet, quinoa, sorghum, and buckwheat directly from our trusted farmers to ensure our breads are full of the essential vitamins and minerals that make up a healthy gluten-free diet.

One Wonders How Do These Untruths Get Started

Many times its decent research that has been misconstrued by a non-doctor who is writing an article for a magazine. The science or health writer doesnt fully comprehend the science and takes what they do understand and runs with it. Compound the lack of full understanding with the desire to entice readers, and you have untruths spreading like wildfire.

Take the 2011 research published in Clinical Gastroenterology and Hepatology. The authors were simply trying to create a bread that wouldnt bother those suffering from celiac disease, despite it containing wheat flour certainly a goal-worthy endeavor.

Lets see where the confusion arose by starting with what the researchers actually did.

First note this was a very small study 13 individuals started only 11 completed the full 60 days. The researchers took celiacs whose disease was fully under control and put them in 1 of 3 groups and fed them bread for 60 days 7 ounces per day, equivalent to about 4 to 7 slices per day.

Group 1 was fed regular bread with over 80,000 ppm of gluten Now you see what kind of hit you get from gluten. Not surprisingly, 2 out of 6 celiacs in this group were forced to drop out because they became so ill. And everyone in this group was discovered to suffer adverse effects based on follow-up blood and biopsy results. Again, no surprise, they were eating bread.

How do you think this group did?

Standard sourdough bread is NOT gluten-free and wont be, based on how its typically made.

Also Check: Is There Gluten In Michelob Ultra

The Tools Youll Need To Get Started:

What Is Sourdough Starter

Sourdough bread starter is an ingredient needed to create sourdough bread. Think of it as a naturally occurring yeast that replaces packaged yeast and creates the rise. It is a naturally fermented element that, because it releases gaseslike bubbles in beerit expands your bread and makes air pockets characteristic of sourdough. The tangy taste of sourdough is a result of the fermented sourdough starter.

Once you create the starter, you can add it to flour and other ingredients to make your own home baked gluten-free sourdough bread. It doesnt require anything other than gluten-free flour, water and salt. Other ingredients may be added to create a flavor you like.

To get started, youll need to spend a few minutes a day for seven days. Then youll be able to maintain it by feeding it more flour and water as necessary.

There are three main distinguishing features of sourdough: taste smell and texture. You might expect that the most difficult feature to achieve in gluten free sourdough would be texture, but as you can see from the photos, the artisan texture, open cell structure and crunchy crust are present in each of my loaves made with my gfJules Flour or my gfJules Bread Mix.

The smell is something that is quite noticeable from the starter. It should be tangy and rather sour smelling to know its really active. If your starter isnt smelling very sour, it needs to age longer and/or be fed more.

But the sour taste was the thing that seemed to be most elusive for me in my bread experiments. Thats fine for me, as I dont prefer a sourdough taste in my bread, but I know many of you do.

My breads came out tasting yeasty and mild, just perfect for sandwiches or dipping in olive oil and balsamic .

No, the sour taste didnt come easily. I did achieve it when I allowed the bread to rise overnight, so if you are searching for that sour, I recommend budgeting time for an overnight rise.

I allowed my bread to rise as I described above, then placed it in the refrigerator overnight , then removed it the next day to sit on the counter to come to room temperature before baking. THEN the sour started to show through!

If you do any experimenting of your own and find other ways to make this bread taste sour-er, please share in the comments below! 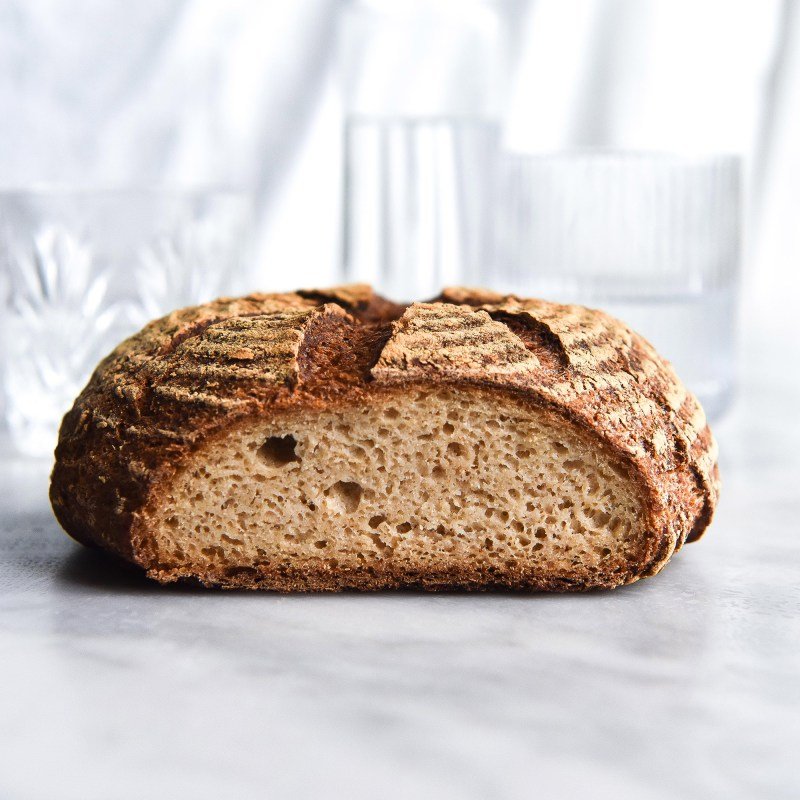 7am feed your starter.

11am mix all the ingredients and leave to rise.

5-9pm prepare the proofing basket / bowl, transfer the dough into it, and let proof for 12 hours in the refrigerator.

Let the bread cool completely before cutting into it . Enjoy!

The Groups Eating Gluten Had Labs Which Showed Damage

In Group 1, two of the six patients opted out of the study due to symptoms that occurred. I think the only surprising part is that the remaining four celiacs eating regular bread lasted 60 days. But therein lies an important lesson.

While they clearly were not debilitated by symptoms, their follow-up blood tests and biopsy revealed the damage you would expect when a celiac patient consumed gluten. These individuals caused severe damage to the lining of their intestine, increasing their chances of developing autoimmune disease, cancer and more.

Group 2 only contained 2 people and interestingly they had no complaints, despite consuming sourdough bread with high gluten content.

Their biopsy, however, showed atrophy, exactly what you would expect when eating gluten. And again we have the same lesson: gluten can be silent, symptom-wise for many, even if they have celiac disease.

No one said avoiding gluten was easy, but its critical in order to regain your health. Its silent nature can make it difficult to know when youve been cross-contaminated to be sure.