How to Make The Best Gluten Free Cinnamon Rolls

Brittany Angell, a very gifted recipe developer, created this recipe and, once again, she hit a homerun!

These gluten-free cinnamon rolls are a unique recipe that utilizes oat flour, coconut flour and tapioca flour to create a wholesome and sweet yeasted roll. These rolls have a soft texture, with a nice whole grain bite to them, and that classic cinnamon-flavored sweet swirl throughout. These rolls are not only gluten-free, but theyre also nut-free too!

Scrape down the sides of the bowl then place it somewhere warm to let the dough double in size, about 1 hour. I use my ovens bread proof setting, though in the past Ive placed the bowl on top of a heating pad set to low. A warm sunny spot should work too!

How To Freeze Your Real Deal Cinnamon Rolls

I get it: life happens, and sometimes you just want to have these Real Deal Cinnamon Rolls ready for you anytime of day, so that you always have a delicious treat on-hand!

If you want to freeze your cinnamon rolls before baking, once you place your pinwheels on the baking sheet, cover them in plastic wrap and place them in the freezer. Or, line a freezer-safe container with parchment, and then place your pinwheels inside, putting a thin layer of parchment between them so they dont freeze together. Once youre ready to bake them, let them thaw in the fridge overnight, and then place them in a warm spot for an hour so they can rise. Then, bake as instructed.

If you want to freeze your cinnamon rolls after baking, follow the same instructions as above, except when youre ready to eat them, you can skip the defrost in the fridge and instead let them defrost at room temperature. Then, bake according to instructions. If you believe you are going to freeze the rolls while making them, I highly recommend NOT frosting them and, instead, storing the frosting in a separate airtight container. When youre ready to eat them, let the frosting come to room temperature as needed, and then frost your freshly-baked rolls!

I hope you guys love this recipe! If you make it, be sure to leave a comment below and let me know what you think! And if you post to , I repost your remakes on my IG stories! xx

What Ingredients Do I Need 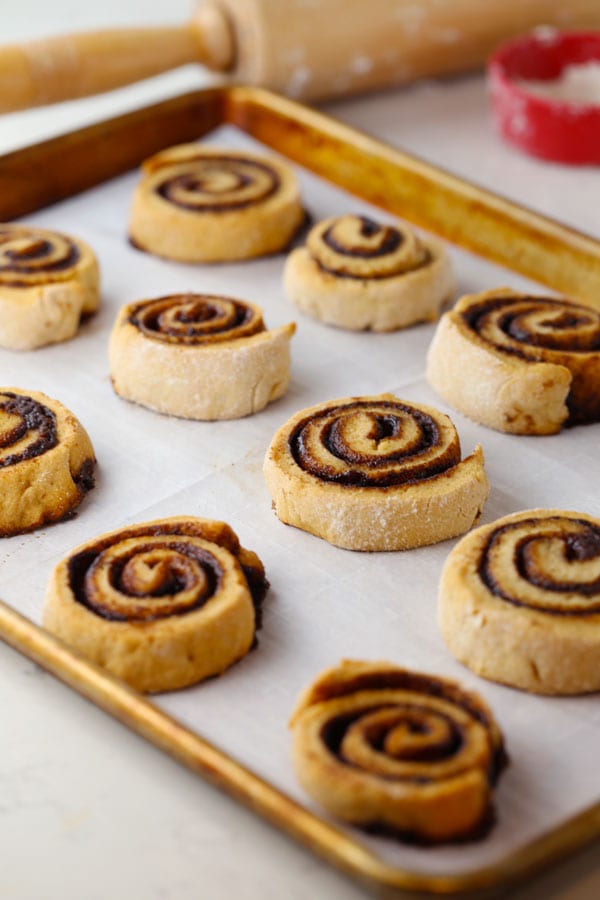 There’s a full printable recipe card below with the full method, but for the shopping list you will need the following:

As you can see, it’s actually a fairly simple ingredients list!

The sugar is important for activating the yeast and flavouring the bake and I wouldn’t recommend baking without it.

I haven’t tried a dairy free version but imagine it would substitute fairly well with a dairy free milk and dairy free spread instead of butter.

I always add extra xanthan gum because it helps with the texture of the bake – I wouldn’t recommend omitting it.

The flour I use is the FREEE gluten free white bread flour, which is available in UK supermarkets.

It’s a blend of rice, potato and tapioca flour, and while I don’t have my own homemade mix it is something I’m working on!

This recipe uses Dry Active Yeast The type that is activated before adding to the dough mix. It is NOT instant yeast.

The recipe also requires that the dough is proofed twice Just like normal bread!

Both of these elements are important to the recipe and the texture achieved giving a superior rise and allowing the best hydration of the flours for a perfect bake.

To clarify, youre not using pudding powder straight out of the box. Youll buy a package of your favorite gluten free pudding and make it according to the package directions, then measure 1 cup of that prepared pudding and add it to the dough.

Jell-O Instant pudding is generally considered safe by the gluten free community because Kraft is pretty strict with their labeling. We also like Vivians Live Again, which is a dairy free and gluten free pudding option. It is harder to find in stores but easy to order online.

Nope! Because these cinnamon rolls are made with oat and coconut flour. You just cant replicate gluten cinnamon rolls with gluten-free flours exactly, simply because traditional cinnamon rolls rely on that gluten for many reasons. Instead, this recipe is a wholesome gluten-free alternative that has a nice bite to it, while still being tender, and of course a warm cinnamon flavor and vanilla glaze.

Here it is – everything you need to make the perfect batch of gluten free cinnamon rolls.

Soft, doughy and sweet, these are just perfect with a coffee for a mid-morning snack!

This recipe makes 12 cinnamon rolls and I recommend making them in a 24cm square baking tin.

If you make this recipe and love it, please do let me know by or using #theglutenfreeblogger. I love seeing your bakes!

And please do leave a review to let others know you loved it too! It would mean the world to me.

How To Prepare Your Real Deal Cinnamon Rolls Overnight

If you want to prepare your rolls ahead of time, so theyre nice and fresh to bake in the morning then just follow these simple steps while youre preparing them:

Once you lay your pinwheels on the baking dish and wrap them in the towel or plastic wrap, set them in the fridge, rather than leaving them out. Then, in the morning, take them out of the fridge and, without uncovering them, let them rise at room-temperature on the counter for 45-60 minutes. Then, follow the baking instructions above. Easy peasy!

What Type Of Yeast Is Used In The Cinnamon Roll Recipe

This recipe uses instant yeast or rapid-rise yeast. I used Fleshmans Rapid Rise Yeast. It is important to use rapid yeast, make sure it fresh and not expired and is at room temperature.

Rapid rise yeast does not need to be proofed and can be added directly to the flour. It is still important to use warm milk because yeast is a live organism and thrives in a warm environment.

Heat the milk just until it feels warm to the touch. Or use a thermometer to check the milks temperature. The ideal temperature for instant yeast is 100°110°F. If the milk is any hotter than that, it could kill the yeast and your rolls will not rise.

If you want to make sure that your instant yeast is still active, you can proof the yeast before adding it to the flour mixture.

The Cinnamon Roll Recipe That Literally Everyone Can Enjoy

A bold statement, and Im prepared to stand behind it. These are THE cinnamon rolls to make, whether you have vegan eaters in your family or gluten free eaters.

Heres why youll love them: These cinnamon rolls rise and puff up and tear just like a classic cinnamon roll. Theres no grittiness to the bread, and honestly, youd think these gluten free cinnamon rolls were made with regular flour. Theyre *incredible.* Quite literally my pride and joy over here.

Plus, these sweet rolls still have that wonderful gooey and sweet cinnamon filling all topped with a classic glaze. Honestly, this will be your go-to holiday breakfast that you can confidently share with your entire family, knowing theyll just love these rolls.

And if youre gluten free, then welcome back to the yeasted dough life! If you tear up at the first bite, I wouldnt be surprised!

How To Make These Real Deal Vegan Cinnamon Rolls 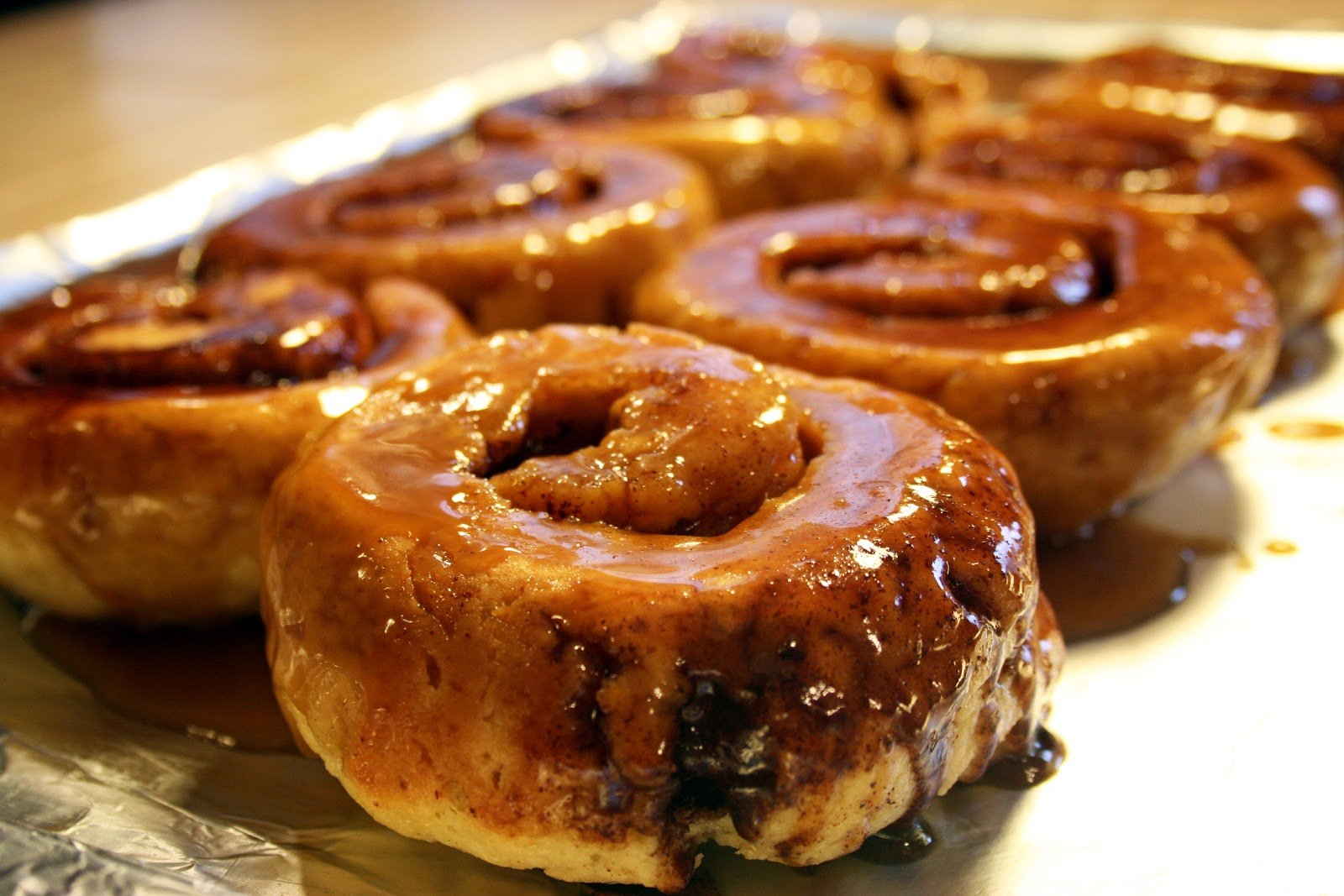 Some of the items linked in this post are affiliate links, meaning, at no additional cost to you, if you click through and make a purchase, I will earn a small commission.

There are some recipes floating around on the world wide web for gluten free cinnamon rolls that arent bad tasting. Believe me, Ive tried almost all of them. But what they always lack is not in flavor, but texture! Am I right, fellow gluten free people??? Isnt that usually the case with all gluten free foods, or at least breads? The texture is just beyond intolerable. Its what weve all settled for over the years. Its good, for gluten free. Blah, blah, blah.

Well, I refuse to settle for rock hard rolls that dont have that feathery-like texture that you can unroll and tear apart, if thats the way you eat your cinnamon rolls . I cant even begin to tell you how many hockey pucks I threw right in the trash over the years. Way too many to count! But I rarely give up when it comes to baking, so I just kept trying. And trying. And trying. Gluten free hockey pucks, 100. Soft and fluffy ones, zero! Until now

The picture below is not an illusion. Its not a trickery of a gluten-filled cinnamon roll pretending to be gluten free. This is the actual gluten free cinnamon roll in all its glory, and it is UNBELIEVABLE!!

How To Store And Freeze

These cinnamon rolls are best enjoyed the day theyre bakedespecially still warm from the oven! After that, theyll start to dry out and harden but will still be enjoyable for a couple days if left covered at room temperature.

How To Roll Cinnamon Buns

Again, the recipe card down below has the full method for making these gluten free cinnamon buns.

But I thought it might be helpful to include a few step-by-step photos of the construction of these beauties!

I don’t know about you but I just find it helps to visualise what I’m doing.

Once you’ve made your dough, you need to roll it out. I recommend doing this between clingfilm sheets as it’s pretty sticky.

Make sure you always wet your hands when handling the dough, as this will stop it sticking to you.

First things first, you’ll need to shape the dough into a rough, flat rectangle with your hands, like this:

Once you’ve done that, take a rolling pin and roll the dough out into a large rectangle, around 4mm thick.

You want it to be approximately double the length on the longest side to the shortest.

You can peel back the clingfilm and use your hands to nudge it back into a neat rectangle as you go – this will help create a neater roll.

This Really Is The Best Gluten Free Cinnamon Roll Recipe Heres Why:

Here in the Life After Wheat kitchen, we have been baking yeast breads and rollsfor over 6 years. We know a lot of tricks to make those taste super good, and wanted to make a gluten free cinnamon roll that also didnt disappoint. And we did it thanks to a secret ingredient that we are soooo excited to share with you!

This recipe is a combination of many different recipes, ingredients, and techniques. There really isnt a single recipe that inspired this, and the secret ingredient? Thats completely original.

Does Gluten Cause Acid Reflux

How To Diagnose Gluten Intolerance