I have found that the best way to measure gluten-free flour is to use the spoon & level method. Use a spoon to scoop the flour out of the bag into a dry measuring cup . After spooning the flour into a measuring cup, use the back of a knife to level the flour off the measuring cup.

Please do not use a measuring cup to scoop the flour directly out of the bag. If you do, you may get more flour than the recipe calls for because the flour often gets compacted in the bags.

First, add all dry ingredients to the food processor . Pulse once to combine. Then, add the cold dairy-free butter in cubes and pulse/mix until you have a crumble-like texture. The last step, is to add cold water 1 Tbsp at a time. It depends on whether you have whole grain buckwheat or not, white or brown rice flour or which starch you are using, the liquid amount may vary.

So I have this Flaky Gluten-free Vegan Pie Crust I usually use to make sweet and savory pies and cheesecakes, but little did I know first that it is perfect to turn it into Pop Tart. If you dont need gluten-free, just make your favorite pie crust with all purpose flour. However, here are the ingredients for our nutritious, gluten-free pie crust:

This recipe does have vegan butter in it, hence it will be flakier but not oil-free if that part is important to you. But this dough is easy-to-make, easy-to-roll, easy-to-handle with only 5 ingredients, and no weird ingredients like xanthan gum or psyllium husk or pricey store-bought GF flour mix. So what do you need then?

Why Do You Add Cornstarch To The Jam Filling

While you could skip the step of adding cornstarch to the jam filling, I think its a great addition to this recipe.

Adding cornstarch to the filling makes it a thicker, stiffer consistency which is perfect for a giant pop tart. I have also tested it without the cornstarch step and the recipe will still work and taste good. The jam filling will just be more liquidy when you take a bite. 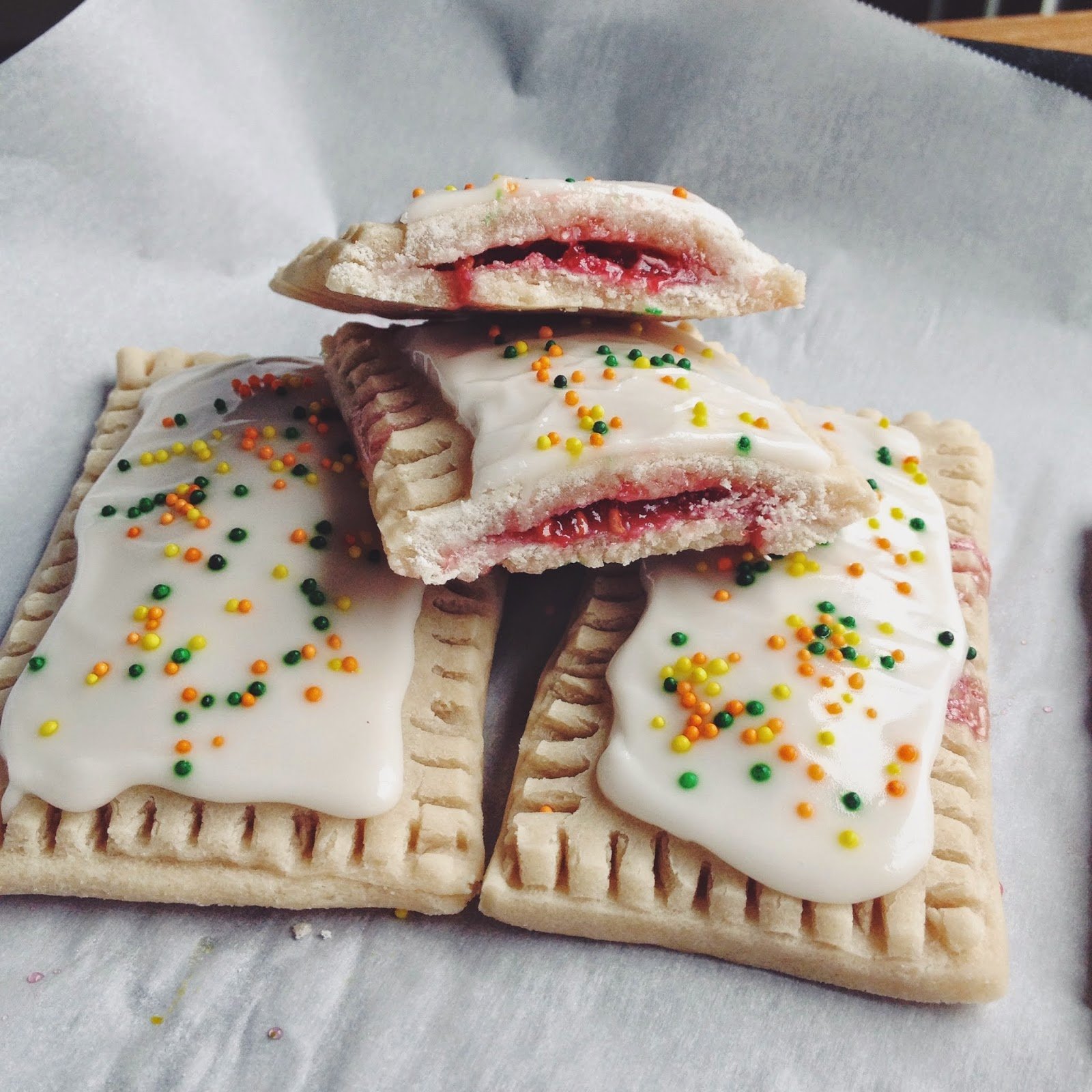 Pop-Tarts are the childhood treats of many people, but now that they have transitioned to a vegan diet, it begs the question are pop tarts suitable for vegans?

While most Pop-Tarts are not suitable for vegans, the Unfrosted Strawberry, Blueberry, and Brown Sugar Cinnamon are vegan. They dont contain animal ingredients like whey or gelatin, which you will find in non-vegan Pop-Tarts.

However, let me point out that even the vegan Pop-Tarts contain controversial ingredients worth analyzing.

Lets first look at the non-vegan ingredients in Pop-Tarts, and then determine whether you should eat the vegan Pop-Tarts even though they dont have animal ingredients.

Rolling Out The Dough

Visit my Flaky Gluten-free Vegan Pie Crust post for my top tips to roll out the dough and answers to all your questions may it be about troubleshooting or substitutions. What you absolutely need to know is the following:

There are milk and egg-based ingredients in this recipe that can easily be converted to suit your allergy or dietary needs and have no effect on the finished recipe.

First, for swapping out the butter, use a non-dairy butter of your choice. I find that Earth Balance butter sticks work great in baking recipes such as this. Their soy-free butter from a carton also works really well.

To replace the dry milk powder, you can swap it for a plant-based protein powder of your choice. Just make sure that it is not a flavored variety as it can affect the final taste of your pop tarts. If you dont have something like this, no worries, just leave this out. Your pop tarts will still be amazing.

The egg in this helps to bind the dough together. A flax egg or chia egg work perfect in this pastry recipe. Simply take 1 tablespoon of ground flax seeds or chia seeds and combine them with 3 tablespoons of almost boiling water. Stir them together and let it sit for about 5 minutes to get really gelatinous. Use as directed in the recipe.

If you want to try making your own Pop-Tarts, try out this Pop-Tarts cereal recipe so you can eat more than just one. Just make sure to buy vegan pie crust, which is surprisingly easy to findmost pastry dough and pie crust is actually vegan . Replace the milk with non-dairy milk.

Although most Pop-Tarts flavors aren’t vegan, it doesn’t mean that you have to miss out on these perfect treats. Whether you’re vegan or not, some of the best flavors out there are actually the vegan ones.

Entertaining For Brunch Also Try These Other Gluten

Brunch is one of those meals that is sometimes hard to make gluten-free. But serve this giant brown sugar cinnamon pop tart and your gluten-free brunch goers will love you to the moon and back.

Scones are also a tasty addition to any breakfast. Try my Gluten-Free Vegan Lemon Scones for a lemony treat. Is there anything better than a breakfast hash? I didnt think so. This Sweet Potato, Apple and Sausage Breakfast Hash is so delicious when topped with a poached egg.

Did you know you can make your own breakfast sausage? Its true! My blueberry turkey sausage is sweet, savory and bursting with blueberries!

Cant forget the eggs! Fearless Dining has the best Turkey and Heirloom Tomato Omelette that is great for a gluten-free brunch. Did you really have brunch if you didnt have a mimosa? This Apple Cider Mimosa from What The Fork is just what you need. Plus theres only two ingredients!

All the inspiration for these Chocolate Cashew Butter & Jelly Pop Tarts came from one of my favorite chocolate bars: the Cashew Butter & Raspberry Jelly Chocolate Bar from Hu Kitchen. The dark chocolate is filled with layers of cashew butter & raspberry jelly, and the whole thing is paleo, vegan, and coconut sugar-sweetened. Its pure heaven. At night, you can usually find me on the couch with a cup of tea and a few squares of it.

But next to by itself, the best way to eat this chocolate is chopped up and tucked into a flaky crust. The flaky crust is both paleo and vegan. We make it with a combination of almond flour and cassava flour for the best, flakiest texture. Its lightly sweetened with coconut sugar, and we cut in coconut oil the way you would cut in butter with a traditional pie crust.

We roll out the crust into a big rectangle and cut it into sections. Then, we top half of those sections with the GOODS.

Spoiler: Some Actually Are

Get more Spoon in your feed.

My go-to childhood snack was Pop-Tarts, specifically the Strawberry and S’mores Pop-Tarts. I’d always assumed that there’s probably some sort of dairy or egg ingredient in all Pop-Tarts and that they wouldn’t be vegan-friendly, but this isn’t actually true for all flavors. So if you’ve ever wondered, “are Pop-Tarts vegan?” you’re in luck. Keep these vegan Pop-Tarts flavors in mind during your next grocery store run, because they’re for kids and college students alike, no matter what your dietary restrictions are.

How Do You Make Gluten

This gluten-free homemade pop tarts recipe is surprisingly easy to make even though it looks like a lot of steps. They really are just lumped into six easy steps. Similar to our gluten-free crescent rolls

Just follow these instructions for delicious breakfast treats in under 40 minutes.

Pro Tip:Pastries can be eaten immediately, stored in the refrigerator for a few days, or frozen to use later. Reheat cooked pastry in a toaster or toaster oven for that crispy crust.

Are Pop Tarts Vegan And Gluten 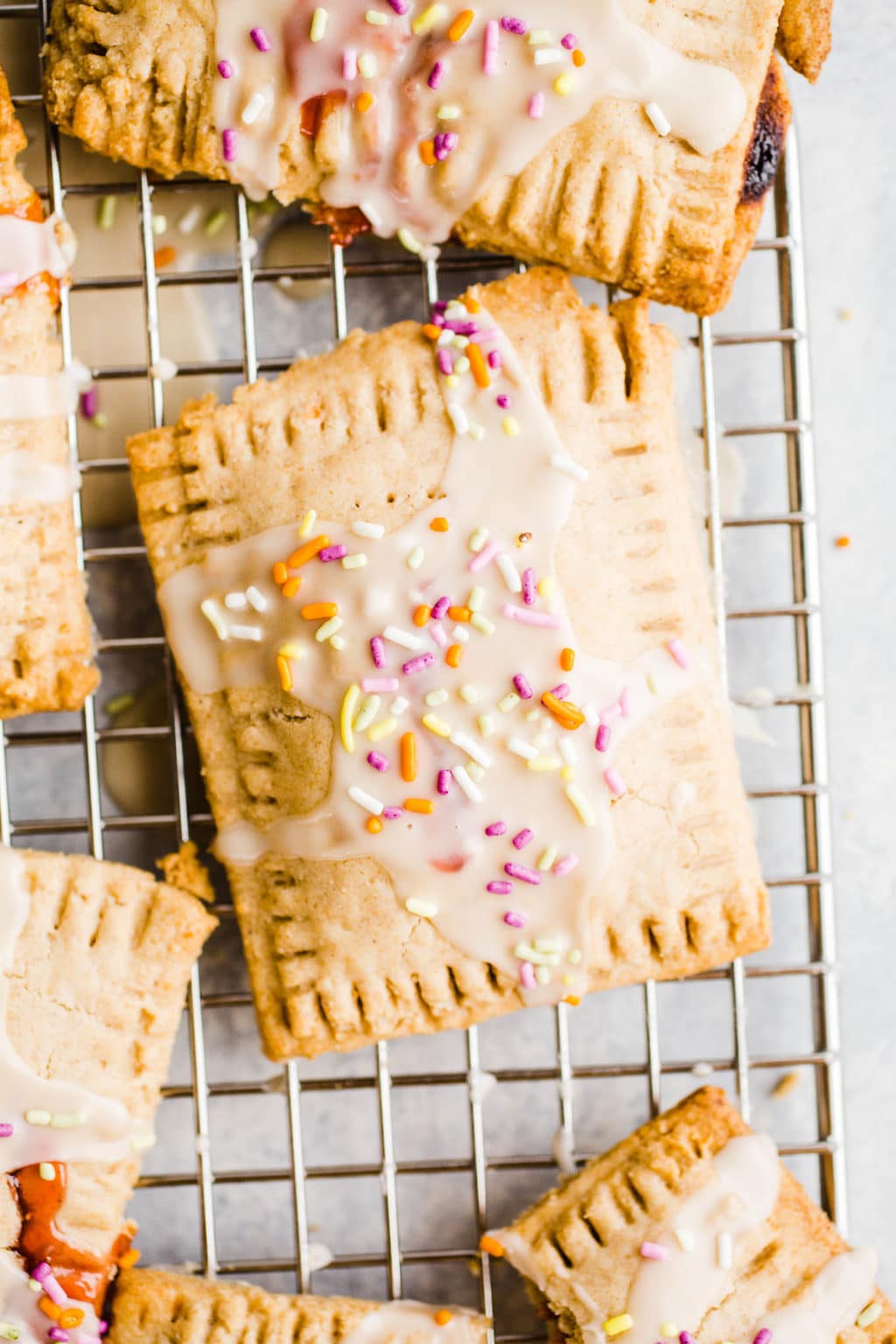 As far as I know only 3 flavors are vegan: unfrosted strawberry, unfrosted blueberry and unfrosted brown sugar cinnamon. However, they have so many ingredient I wish they werent there like high fructose corn syrup, palm oil or whether the food coloring of red 40 or yellow 6 is. I usually prefer to know what I am eating.

But more importantly none of them are gluten-free. Dont sweat it though I got you covered with my delicious homemade not only vegan but gluten-free as well Pop Tarts. No weird ingredients you cannot pronounce or dont know where to buy.

Our Recommendation For Vegans

Future Kinds Essential Vitamins: This is our favorite multivitamin. Its not the typical multivitamin because it was formulated to specifically address potential shortcomings in the vegan diet. It contains the essential vitamin B12, vitamin D, and Omega-3 fatty acids delivered in necessary doses so you dont have to worry about potential deficiencies. Want to learn more about it? Check out the review we did on it.

To Make The Frosting:

Get ready for gluten free pop tarts that are so flaky, you are not going to believe all of the flaky layers! Fill these homemade pop tarts with your favorite jam, Nutella, or anything you like! They are sure to please everyone in the family!

If I had to think about what I have truly missed since going gluten free, I would have to say pop tarts are at the top of my list. I dont mean the gluten free ones you can buy in a storethose lack the flaky layers that make pop tarts so memorable!

I have tons of delicious gluten free dessert recipes on the blog. Let me know which ones you try :-).

How To Make The Pop Tart Crust

The key to this recipe lays in the crust. I started with my allergen friendly pie crust and transformed it a bit to more closely resemble a pastry.

It starts with a combination of butter and vegetable shortening. You want to make sure that they are all really cold heck you could even pop them into the freezer for 5 minutes before getting started on this recipe.

The reason we want our fats to be so cold has to do with the flakey-ness of the final pie crust. If you let the butter melt into the flour, it becomes too difficult to work with and will make your final pastry crust resemble a cracker more than a pie crust. By keeping the fats chilled, they will stay somewhat whole as you roll them out, and when you bake the pastry, the steam created by the butter and shortening will create little air pockets. Air pockets = flaky pie crust.

Thats why I love making pie crusts in a food processor. It blitzes ingredients together super quick and doesnt allow for the warmth of my hands to really mess with the butter or shortening. You can even chill your bowl for extra pie crust insurance.